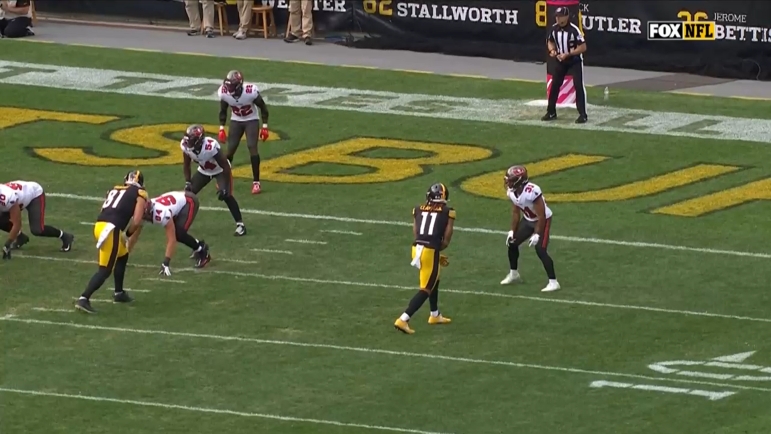 After struggling to find much consistency through the first five weeks of the 2022 season, it felt a little bit like third-year Pittsburgh Steelers wide receiver Chase Claypool was starting to be phased out just a bit.

Then came the second half of the 20-18 win over the Tampa Bay Buccaneers at Acrisure Stadium.

In the second half, Claypool took over, finishing the afternoon with seven catches for 96 yards and a touchdown, putting together a complete performance in the win, helping the Mitch Trubisky-led Steelers pick up a much-needed win, snapping a four-game losing streak.

Throughout the performance, Claypool really settled into the slot role and won over the middle of the field consistently, converted some key third downs and even had a spectacular back-shoulder, falling catch of 26 yards to move the chains, helping close out the win.

For second-year offensive coordinator Matt Canada, Claypool’s performance wasn’t a surprise, considering the way he won and where he won on the field within the offense, and added while speaking to reporters Thursday during his weekly availability that those types of perfomances — from Claypool or any other receiver on the Steelers’ roster — shouldn’t be uncommon moving forward within the offense.

(here he is on chase claypool’s big game sunday) pic.twitter.com/4p6MAUfmDY

“He [Claypool] started making plays, and the quarterback got a feel of the way the game dictated itself,” Canada stated to reporters Thursday, according to video via the Pittsburgh Tribune-Review’s Chris Adamski. “Some of the matchups that occurred, the situations, it was kind of a combination of things.

“We want to get them all going more,” Canada added when asked it Claypool’s performance was something he could dial up again this week. “With the weapons that we have, there’s probably games that should be like that. We should probably have a game where a guy has a bunch, whether they’re choosing to double Tae [Diontae Johnson], or focused on George [Pickens] or focused on Pat [Freiermuth]. That shouldn’t be something that should be that uncommon, but obviously we have to have more productivity.”

Film Room: WR Chase Claypool Gets Redemption Against The Bucs

It shouldn’t be that uncommon to see that type of performance on a weekly basis from the Steelers’ receivers, which would include a high number of catches and a healthy yards per reception number. Unfortunately, it’s been pretty uncommon under Canada’s direction offensively the last year and a half.

The first half against the Buccaneers, those plays weren’t really happening with Claypool or any of the receivers. That’s not to say Kenny Pickett played poorly before getting hurt because he didn’t, but something changed when Mitch Trubisky stepped into the huddle. He attacked downfield a bit more compared to Pickett in the first half, and really gave guys an opportunity to make plays down the field, especially Claypool.

For that, he was rewarded, which led to an impressive stat line from Trubisky in relief.

Claypool deserves a ton of credit, too. He found the soft spot in the zone consistently, knew when to extend his routes and show Trubisky his numbers, and when he was targeted, he made the play. That goes an incredibly long way.

Can it be replicated in Week 7 against the Miami Dolphins on the road? That remains to be seen, but with the middle of the field seemingly opened back up on Sunday against the Buccaneers, and Claypool playing with confidence again, all bets are off.