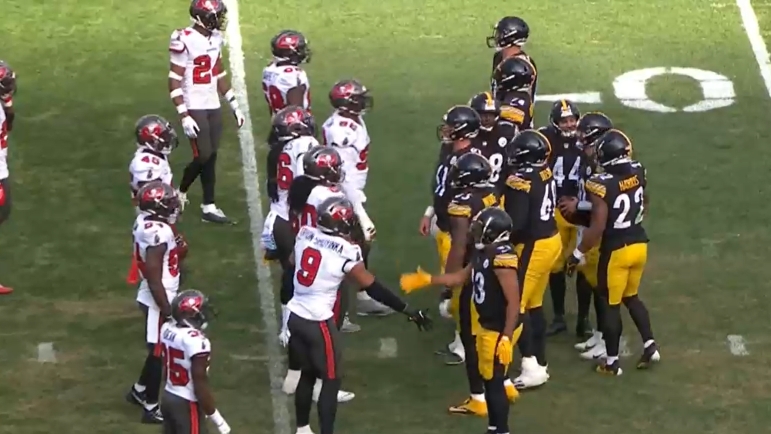 The Pittsburgh Steelers’ offense looked better on Sunday than they have for most of the season, outside of a short stretch or two. They tied their season-high of offensive points scored at 20—which says a lot in and of itself. But even though there was still much to be desired, they like where they finished and hope to keep that going.

And by finished I mean literally, how they closed out the game. The defense gave up a touchdown with over four and a half minutes left to play. But the Tampa Bay Buccaneers didn’t get another chance to touch the ball, even though they had all three of their timeouts, because the offense shut the door. Even if it wasn’t easy and required some deep third-down conversions.

“Maybe it wasn’t conventional, but I’m really, really happy for our players”, offensive coordinator Matt Canada told reporters Thursday about the closing drive, via transcript. “We ended the game taking a knee and didn’t let them back on the field”.

It’s been a while since the Steelers ended a game in the victory formation. In fact, it hasn’t happened since last season. Their only other win came on a game-ending field goal in overtime, after the defense had given up the lead. But just because they ended the way they wanted doesn’t mean they took the straightest path to get there.

“We’ve got to keep getting better, and all those things we know, but I think for our players, I’m really happy for them that they were able to end the game taking a knee and not allowing them back on the field and not forcing our defense to have to go out and play again”, Canada added. “I think that’s something that we can certainly build on and we’re going to build on, while all the while knowing we’ve got to get way more detailed, be more efficient and all the things we want to do”.

But can they really build off of that? I mean—not the way things went, right? Their second-half performance is non-replicable. You cannot gameplan the ability to repeatedly convert on 3rd and 11-plus on several occasions, including twice on the game-ending drive alone.

This is clearly an offense very much in need of improvement. Do they have the pieces to get it done? The passing game wasn’t quite humming in the first half with Kenny Pickett. There’s still so much that we have to learn about what this group’s personality is, and we’re not going to find out until we go through the games.