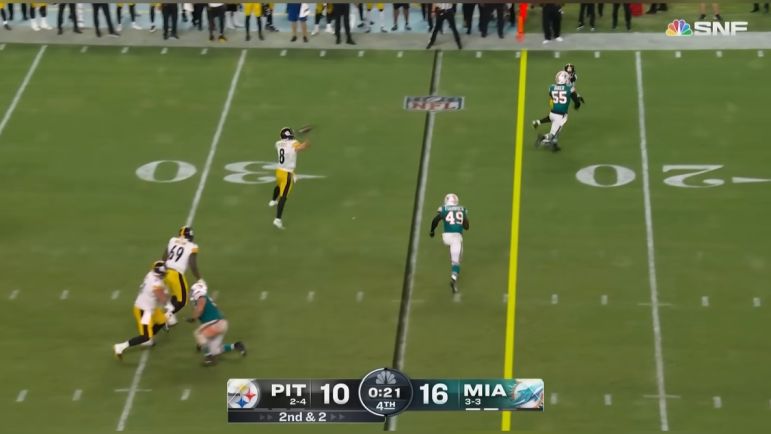 The verdict is still out Pittsburgh Steelers’ first-round rookie quarterback Kenny Pickett, and will be for a long time. After an up and down performance against the Miami Dolphins last Sunday where he threw crucial interceptions down the stretch, Pickett learned a few hard lessons. When offensive coordinator Matt Canada was asked whether he believes the pressure was getting to Pickett, he did not mince his words.

“With Kenny? Never,” Canada said when asked whether he believes the pressure is getting to Pickett according to a transcript provided by the team. “We’ve made that decision, right? That’s why we’re doing what we’re doing. Pressure is not something that you worry about with Kenny.”

As Pickett continues to get more games under his belt, the assumption is that his comfort level is growing. The rookie quarterback had two shots at game-winning drives against the Miami Dolphins last Sunday, and failed to capitalize on both. However, he showed that he is more than willing to take shots down the field, which Steelers Nation have wanted badly in recent years. Pickett took a gutsy shot to covert a fourth down drive to tight end Pat Freiermuth, and the throw on the final interception itself was courageous.

“You’d have to ask him that to get the right answer,” Canada said when asked how Pickett remained calm in the final three minutes. “We’ve all talked about that ‘it’ factor, and that’s an answer you’d say now, and I’m sure it’ll be all, ‘The ‘it’ factor didn’t show up.’ But in the long term of this guy’s career, both what he’s done and what he’s going to do, I strongly feel you’ll see him win a bunch of games in that moment. I think he knows what to do. He puts his shoulders back, he leads. It didn’t go quite the way you want it to, or we wanted it to. But it will.”

If the “it” factor is defined by playing well under pressure, it’s difficult to apply it to the limited sample size of Pickett’s playing career. There are times where Pickett has shown signs of having the “it” factor, and there other where he has not. Interpreting his mistakes this past game as growing pains is an optimistic way of looking at his performance. As a rookie, Pickett’s mistakes are only natural, and his willingness to stretch the field may be a good sign. When looking at the career trajectory of great quarterbacks, many of them began their careers with trial and error as Pickett is. It is still early, and Pickett’s mistakes are not indicative of him being a bust, nor of him the next Ben Roethlisberger. Pickett has received praise from many of his teammates for his ‘swagger’, as the 24-year-old’s attitude appears to have impressed early and often.

Canada in the offense’s struggles are no secret. While his confidence in Pickett is encouraging, it will only be meaningful with results. As the team prepares for a tough road matchup against the NFL’s only undefeated team in the Philadelphia Eagles, and they will need improvement from Pickett to have a shot at the upset and to avoid a woeful 2-6 start. Pickett will have many more chances to prove his capabilities, and if Canada is right about him having the “it” factor, the Steelers may have found their guy.