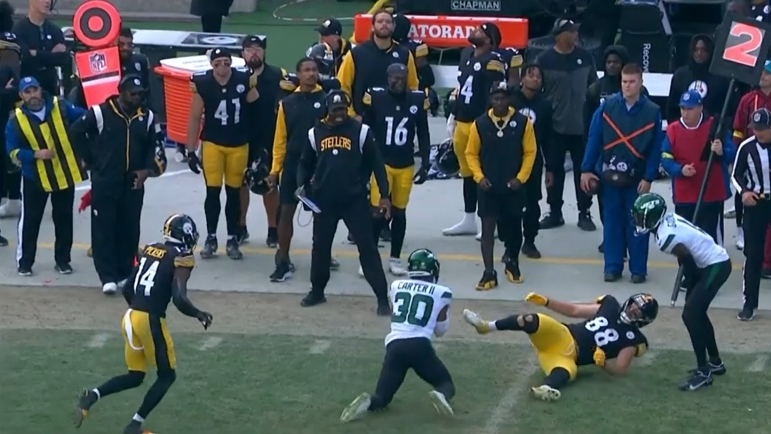 Pittsburgh Steelers head coach Mike Tomlin pulling the trigger on inserting rookie quarterback Kenny Pickett into the game at halftime on Sunday was not an idle decision. He knew, even though he didn’t say it, that he was officially beginning the next chapter in the team’s history.

Pickett’s first game could have, and should have, ended in triumph, but the penultimate drive thanks to a sequence of unfortunate plays provided the door for the New York Jets to sneak in and capture the win, spoiling what was an encouraging debut.

“I thought he handled it very, very well”, offensive coordinator Matt Canada told reporters on Thursday about how his new rookie quarterback took to being inserted into the game midstream. “Like I said, right up until that last drive”.

More specifically, the second to last drive he’s talking about, not the one two-play drive ending in a Hail Mary attempt with seconds to go. And it was the end of that penultimate drive, not the entire thing, which started out promisingly.

It began with Pickett finding Diontae Johnson for two short gainers that moved the chains. Facing 3rd and 3 a short time later, he found George Pickens for a 26-yard gain on a nifty play on both sides, but that’s where things started to go wrong.

“We had some plays that we always have. That last drive, it was just disappointing”, Canada said. “We had first-and-10 and had a toss that just ended up being on the ground and got a second-and-long and obviously had the ball turned over and didn’t finish the game. But I thought, as a whole, Kenny came in and he was ready to play and did a good job”.

On the next play after the Pickens catch, they ran a pitch to running back Jaylen Warren. Pickett had his foot caught up with the offensive line, which took something off of the pitch, and the back couldn’t secure it cleanly as a result, netting a loss of five. The play after was the would-be throwaway that went off of Pat Freiermuth’s hands for an interception.

The Jets took the gift and literally ran with it, marching down the field from their own 35-yard line and ending in a Breece Hall rushing touchdown that put New York ahead for good with just 16 seconds left to play and only one timeout.

Up until then, Pickett’s debut had gone well. Yes, his first pass ended up in the wrong hands, but his next two drives found him in the end zone. He was driving the offense down the field again on that fourth drive, having already captured the lead, when misfortune squandered the effort and put a damper on the fairy tale of the golden boy’s debut.