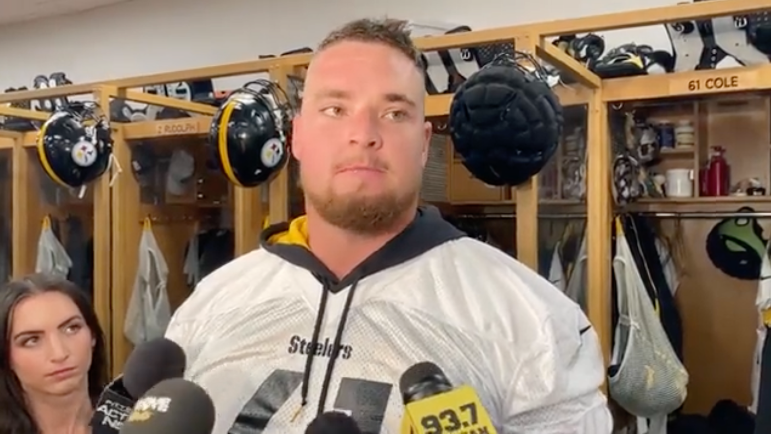 The Pittsburgh Steelers re coming off a disappointing loss at home to the New York Jets and are currently preparing to travel to Buffalo to take on the AFC-favorite Buffalo Bills this coming Sunday.

C Mason Cole was asked about the upcoming matchup and if the current Vegas line against the Steelers has caught his attention. He responded that lines don’t depict the actual result of the game as the team is preparing to go into Buffalo and come out of there with a win.

“I don’t pay any attention to what Vegas is saying what the line is,” Cole said to the media Wednesday before practice in the locker room on video from Chris Adamski’s Twitter page. “They are going to do what they’re going to do. In our minds, we’re going to go out there and win the game. Screw the Vegas lines. We don’t worry about that whether we are the favorites or if we are the underdogs.”

Mason Cole doesn’t care the Steelers are entering this game as the biggest underdog the franchise has been since the 1960’s pic.twitter.com/5sYoBn9Mrg

As mentioned yesterday by ESPN’s Adam Schefter, the Pittsburgh Steelers enter their Week 5on the road against the Buffalo Bills a 14-point underdog which is their greatest line against them in decades. Subsequently, Pittsburgh is the only team since 1970 to have never been a 14-point or more underdog up until this point.

It’s understandable why Pittsburgh is seen as such an underdog in this David vs. Goliath matchup. Their offense has been dreadful in terms of converting on third down and sustaining drives consistently over the first four weeks of the season. Their defense doesn’t inspire much confidence either as they have struggled to get off the field on possession downs and haven’t been able to consistently pressure the passes since T.J. Watt went down with a pec injury.

Josh Allen and the Bills’ offense is one of the best units in all of football and will present a difficult challenge for a Steelers team without their best defensive player while Buffalo’s defense has shown to be quite the formidable unit at rushing the passer after adding Von Miller in free agency this spring.

Still, Pittsburgh has shown that they can come out the victors in matchups most predicted them to lose in the past. They escaped Week 1 with a victory on the road in Cincinnati against the reigning AFC Champion Bengals and beat this same Bills team opening weekend last season in Buffalo. Both matchups had the Steelers as clear underdogs, but that appears to be when this team often operates best as HC Mike Tomlin will do what he can to get Pittsburgh geared up to play for the upset even when circumstances may not be ideal.

Still, this game Sunday could go in a similar fashion to Pittsburgh’s Wildcard loss to the Kansas City Chiefs last season where they got drilled 42-21 and no one would bat an eye. Cole may be optimistic here given the current reality of this team and the state of the team they are facing this weekend, but should this team want to get on-track yet this season and prove to the doubters that they are still a competitive team, going into Buffalo and giving them a run for their money would be a good start to making that happen.