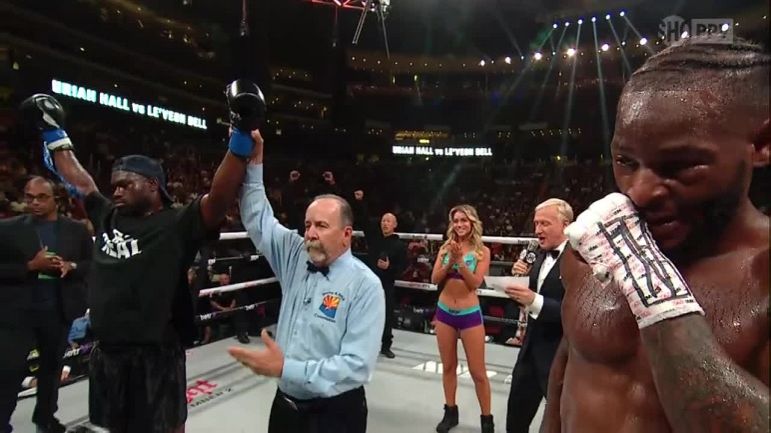 Le’Veon Bell found out pro boxing is a little bit tougher than the celebrity stuff. After knocking out Adrian Peterson last month, Bell lost his pro boxing debut Saturday night to Urias Hall, defeated in unanimous decision by a score of 40-36. While Bell went all four rounds, Hall easily controlled the match. The judges gave him a 10-9 advantage in all four rounds.

Here’s a look at Hall being named the winner.

Uriah Hall gets the 40-36 nod on all three judges scorecards #PaulSilva pic.twitter.com/16a5VbWkOK

Bell’s face is obviously pretty beat up. Hall landed the most significant blows of the match with Bell doing his best to stay on his feet and block, though the fight was generally uneventful except for small spurts like these moments.

Uriah Hall and Le'Veon Bell are swinging for the fences to end the 4th and final round. #PaulSilva pic.twitter.com/bVMDNF9IXj

Bell fought and TKO’d Peterson September 10th before trying his hand in the pro circuit. Hall is a retired MMA fighter with an accomplished resume before retiring earlier this year. There was certainly no shame in Bell losing this fight and forcing a judges decision is an impressive accomplishment. Bell did get in at least one good shot on Hall but it wasn’t enough.

.@LeVeonBell stuns Uriah Hall In Round 3 😮

Still, Bell’s boxing career is clearly limited and probably best suited for celebrity undercard rounds like the bout he had with Peterson. Celebrity boxing has become popular in recent years with YouTube star Jake Paul being among the most notable.

Earlier this week, Bell revealed he had a chance to fight longtime NFL back Frank Gore but turned down the opportunity because, per this NFL.com article, “I don’t feel like those guys are on my skill level when it comes to boxing.” After tonight, Bell clearly isn’t on Hall’s level either.

Bell also said in the article there was a “one percent” chance he would return to the NFL and that’d he only join a Super Bowl contending team that would want him to start. At this stage of his career, Uriah Hall has a better chance of making that happen.

Assuming this is the end of Bell’s NFL career, it’ll wrap up with him rushing for over 6500 yards and 42 touchdowns while chipping in another nine receiving scores. A 2nd round pick of the Steelers in 2013, he spent five years in Pittsburgh before sitting out the 2018 season after being franchise tagged for a second straight year. His career went downhill from there, quickly flaming out with the Jets before bouncing around the league with short stints in Kansas City, Baltimore, and Tampa Bay.