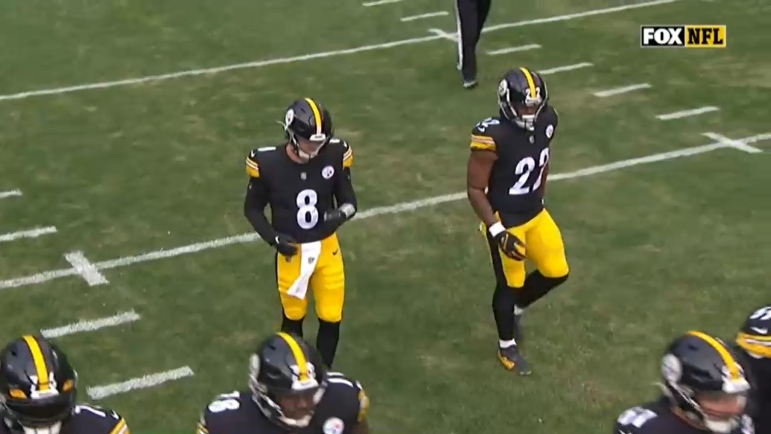 It’s no secret the Pittsburgh Steelers’ offense is lacking big plays. But Kenny Pickett doesn’t believe the solution is solely to run the Joe Flacco offense, the one where you chuck it deep for your receiver and hope for a catch or DPI call. Speaking to reporters Wednesday, Pickett said he and the offense are coming up with different ways to create chunk plays.

“I think giving guys balls on the run where they can run after catch and get good opportunities there,” Pickett said via a team transcript. “I think it’s not just about throwing it deep. Sometimes, in the NFL, we’ve got to scheme the deep balls; you’re not going to just run by some of these guys. If they’re playing soft covers, you can’t do it.”

Defenses can certainly scheme away the deep ball just in the way the Steelers’ defense did to Miami Sunday night. Pittsburgh played a two-high shell to take away the outside speed of Tyreek Hill and Jaylen Waddle, though the Dolphins countered well by throwing over the middle and utilizing run-after opportunities that Pickett outlines.

So far, the Steelers’ offense has largely been limited to outside the numbers. It’s an offense that’s focused mostly on out-breaking routes, comebacks and out routes, concepts that have greatly limited YAC opportunity. Here’s the YAC numbers Chase Claypool and Diontae Johnson are on pace for this season compared to their 2021 totals.

And rookie George Pickens has just 52 yards of YAC on the season.

Pickett says the Steelers are rethinking their way to create big plays by attacking different areas of the field.

“You get guys the ball on the run and let our athletes be athletes and get them in space. That’s another way we can get some of the splash plays. So, there’s different ways to do it. We’re working hard at it.”

But the Steelers are seven games into the season and haven’t made many changes to their offensive structure. Vertical or horizontal, Pittsburgh has just one completion of 40+ yards this season, complete to rookie Connor Heyward on a busted coverage against the Tampa Bay Buccaneers. Johnson’s longest catch of the year is 25 yards, Claypool’s is 26 yards, while Pickens’ is 36 thanks to a sensational catch against the Cleveland Browns.

This Steelers’ offense isn’t a well-oiled machine. It’s a squeaky wheel in need of lots of grease, a unit that won’t smoothly and consistently march down the field. It needs chunk plays downfield to flip the field and put up points. Until that happens, it’ll keep getting what it’s getting. Which isn’t much of anything.