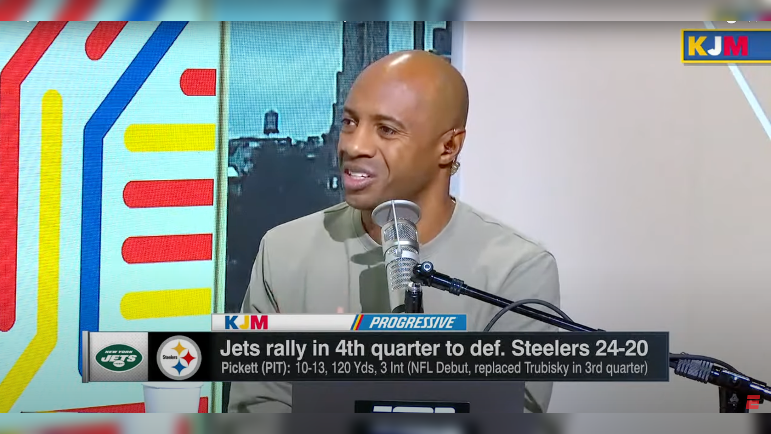 For ESPN analyst and “Keyshawn, Jay and Max” co-host Jay Williams, the Pittsburgh Steelers making the decision to switch from Mitch Trubisky to rookie Kenny Pickett at the half provided more than just a spark inside Acrisure Stadium to the black and gold faithful and the team as a whole: it brought back a sense of consistency and aesthetics that the Steelers were missing early in the season.

Appearing on ESPN Radio Monday morning to discuss the Steelers’ 24-20 loss to the New York Jets and the decision to begin the Kenny Pickett era at the half, Williams stated that Pickett’s body language and the way he carried himself on the field Sunday in two quarters of play reminded him more of what the Pittsburgh Steelers are all about and how they play football than Trubisky, in four starts, ever did this season.

Some reading that could be scratching their heads wondering what that all means, considering it is an interesting take. But Williams stated that Pickett trash talking defenders, carrying himself with poise and really just genuinely enjoying the moment and having fun with it was a return to Pittsburgh Steelers football, which inspired confidence.

“Whenever I watched Mitchell Trubisky lead, it seemed like there was uncertainty, for some reason, whenever I saw his face,” Williams said, according to video via the ESPN YouTube page. “There’s something to be said about that. When I watched Kenny Pickett, he was talking trash to people on the field. I’m like, ‘Damn, I like this rookie’s style.’

“He’s out there with two rushing TDs, very similar style to Jalen Hurts, where he took the punishment. …He barreled through it. I think that kind of energy reminds me so much more of Pittsburgh Steeler football than what Mitchell Trubisky brought to the table.”

First QB in NFL history to rush for 2 touchdowns in debut:

Pickett’s entrance into the game and then his subsequent performance on the field certainly gave the Steelers a jolt, igniting the crowd and giving a moribund offense that struggled to do anything in the first half a real shot in the arm. He took some shots, made some plays with his legs and let defenders know about it a bit, as Williams pointed out.

The play of the game from Pickett though was the throw up the seam to tight end Pat Freiermuth, in which he took a huge hit from New York Jets defensive lineman Quinnen Williams on the throw, then got up off the turf and smiled at Williams, letting him know he’s going to have to come harder next time.

That’s what Williams is talking about. Pickett has that “it” factor, that easy swagger to him that inspires confidence in his teammates around him. That much was clear on Sunday at Acrisure Stadium. How that transpires the rest of the season remains to be seen, but there was a different feel to things with the black and gold once Pickett entered the game.