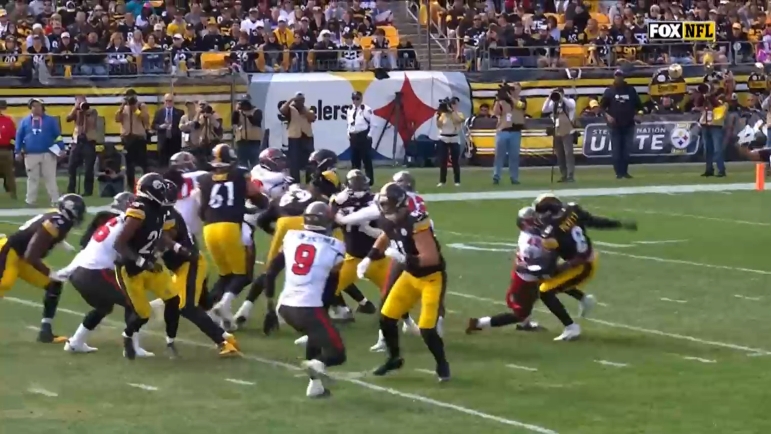 The Pittsburgh Steelers held their breath last Sunday as QB Kenny Pickett exited the game against the Tampa Bay Buccaneers after taking a big shot from LB Devin White. Pickett was put into the concussion protocol and was unable to return to the game. Thankfully, QB Mitch Trubisky filled in admirably for Pickett, having his best performance of the season to help Pittsburgh secure the upset win over Tampa Bay.

Kenny Pickett finds Diontae Johnson downfield, but he leaves the game after getting decked by Devin White #HereWeGo pic.twitter.com/qfbCliQm7O

During HC Mike Tomlin’s press conference on Tuesday, he said that Pickett was still in the concussion protocol, but also mentioned that he was expected to be a full participant in practice and that he would get the start Sunday night in Miami against the Dolphins if he got cleared. On Friday morning, it was announced that Pickett as well as TE Pat Freiermuth and CB Levi Wallace all got cleared from the concussion protocol and will play against the Dolphins this weekend.

Pickett was asked about the concussion on Friday as well as his thoughts about the status of concussions across the league, to which he responded that he can’t judge anyone else’s situation other than his own.

“I’m sure naturally because of what happened, like you said, around the league people are looking at it more,” Pickett said to the media Friday in the locker room on video from Chris Adamski’s Twitter page. “But obviously, every case is its own. It’s different. So, like I said, trust the doctors and I feel good with where I’m at.”

QB1 is talking to us again pic.twitter.com/pp5sIpWWwO

Pickett was referring to the situation involving Dolphins QB Tua Tagovailoa, who sustained a scary concussion on Thursday Night Football against the Cincinnati Bengals a few days after being questionably cleared to return after what appeared to be a head injury against the Buffalo Bills. Tua has been held out of Miami’s last two games in what appears to be Miami’s and the NFL’s attempt to take more seriously the severity of possible head and neck injuries after watching Tua shrivel up when down on the field in Cincinnati.

The NFL and the NFLPA updated the concussion protocols after the Tua injury, making it easier to rule players out of the game who shows signs of “ataxia,” or any clear and obvious instability. This increased focus on concussions likely played a role in Wallace and Freiermuth missing last week’s game against the Bucs, but given the importance of players’ long-term health, increasing the emphasis on preventing players to return to the game that exhibit symptoms was the right move for the league.

However, it looks like Pickett has passed all the necessary tests and will be the man under center for the Steelers Sunday night in primetime as they look to climb out of a 2-4 hole against the Dolphins.