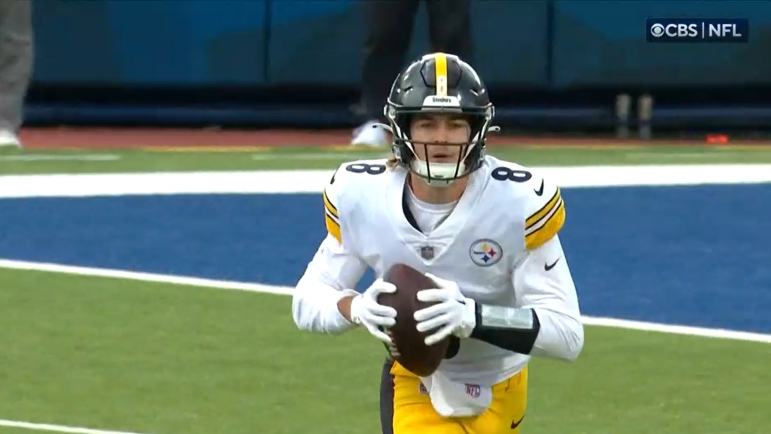 As the Pittsburgh Steelers prepare for a crucial Week 6 matchup against the Tampa Bay Buccaneers, rookie quarterback Kenny Pickett is preparing to make his second start. In doing so, he is expanding on his limited reps with the starting offense every day, as he was only recently elevated to be the team’s starting quarterback over Mitchell Trubisky. When asked about his rapport with his receivers Pickett gave an optimistic answer.

“It felt a lot better this first day of practice versus last week,” Pickett said in a transcript provided by the team. “Obviously, last week was my first time really getting full days work with those guys. I felt like today was a lot cleaner from a timing standpoint and in assignment. I think our guys really did a good job of studying the game plan and being more focused, something that we’ve been talking about. Having less missed attempts and getting guys in the right spot. So, really happy with the first day of work so far.”

Having a rookie quarterback make the painstaking adjustment to the NFL is not a familiar process for Steelers Nation. The last time it happened — in 2004 with all-time great Ben Roethlisberger — worked out pretty well, as the longtime Steelers’ quarterback went undefeated in his rookie season. However, the NFL was in a different era when Roethlisberger made his start, as he was playing for a run-first defensive team.

Pickett arguably has a taller task than Roethlisberger did in his rookie season, as he is being asked to throw the ball at a far greater rate, as was showcased on Sunday against the Buffalo Bills. For perspective, Pickett threw the ball 52 times in his first start, while Roethlisberger’s season-high in his 2004 rookie year was 30, and that came in a playoff game.

Pickett is throwing to a relatively youthful starting group of receivers. In a limited sample size thus far, it appears that fellow rookie George Pickens is his favorite target in the group. The duo had an opportunity to play together dating back to the rookie minicamp, and appear to have ample chemistry.

However, Pickens was not Pickett’s most-targeted receiver against the Bills, as Diontae Johnson led the team with thirteen targets, only catching 38.5% of them for five catches and 60 yards. On the other hand, third-year receiver Chase Claypool had nine targets, also with five catches and 50 yards. For context, Pickens had eight targets, and was the team’s leading receiver in both catches (6) and yards (83).

As great as it is to see the connection between the two rookies, it is vital for Pickett to develop proper chemistry with Johnson and Claypool. This is expected and likely due to limited reps as well as playing on the road in a hostile environment. Evident by the numbers, the problem is not with Pickett’s ball distribution. We have seen Pickett and Johnson have chemistry before in a preseason touchdown against the Jacksonville Jaguars, where Pickett showed great anticipation and trust in Johnson.

Pickett is getting a fellow rookie receiver back from injury in the near future in Calvin Austin III, who he also had ample reps with dating back to rookie minicamp. The chemistry struggles that Pickett had in his first start are only natural, and the expectation is that it will improve with more reps, as the rookie quarterback stated.