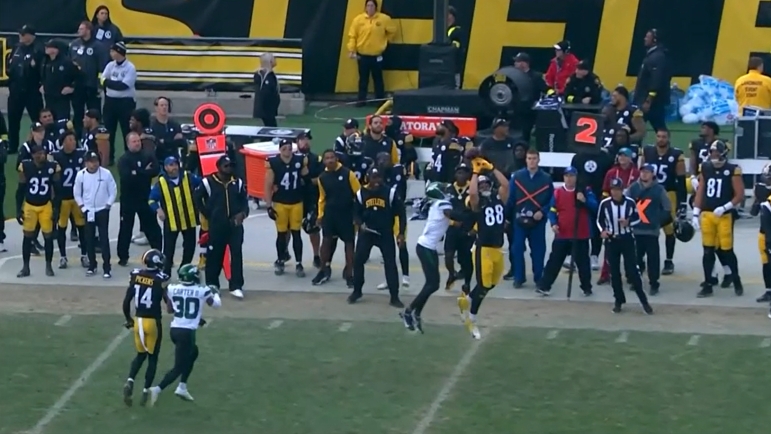 Entering the game as the starting quarterback for the Pittsburgh Steelers after halftime Sunday at Acrisure Stadium in a bit of a surprise move, rookie quarterback Kenny Pickett provided the Steelers with a real spark offensively.

That said, he also had a crucial turnover in the fourth quarter that can ultimately be chalked up to a rookie mistake, one that had a hand in the Steelers eventually dropping a tough 24-20 decision to the New York Jets at home at Acrisure Stadium.

On a second and 15 at the Jets 36-yard line, Pickett found himself under pressure from the New York pass rush. Instead of attempting to throw the football away, he floated one to the sideline that was a bit out of reach of tight end Pat Freiermuth, which bounced off the second-year tight end’s hands and into the diving grasp of Jets safety Michael Carter for the interception, ending a potential scoring drive that could have helped the Steelers put the game away.

Instead, with the interception the Jets then marched 65 yards in 10 plays, resulting in the go-ahead touchdown on a Breece Hall two-yard run, leading to the Steelers’ loss.

After the game, Pickett spoke with reporters and stated that he was trying to throw that football away, putting it where only Freiermuth or nobody could get it. Instead, he didn’t get it high enough, resulting in the turnover that ultimately cost the Steelers.

“I wanted it higher than that, definitely. Either Pat was gonna get it or was gonna be out of bounds,” Pickett stated to reporters, according to video via the Steelers official YouTube. “I didn’t put it high enough. I cannot throw an interception there in that point of the game. Obviously we’re moving the ball, we wanna be aggressive, but at the same time, the clock was our friend there and I wanted to possess the ball and not do that and give good field position.

“I can’t make that mistake.”

It was a costly one, no doubt, one that Pickett can’t make. Those types of mistakes come with being a rookie trying to make a play, especially on the move — something he had done a few times to that point in the game.

That said, he has to be disciplined enough to simply throw that one 15 rows into the stands, especially with the type of pressure he was facing, having drifted back to midfield in his drop.

Instead, the Jets took advantage of the rookie mistake and ultimately drove down the field for the game-winning score, sending the Steelers home with another bad taste in their mouths, and Pickett frustrated with his decision-making on that play.