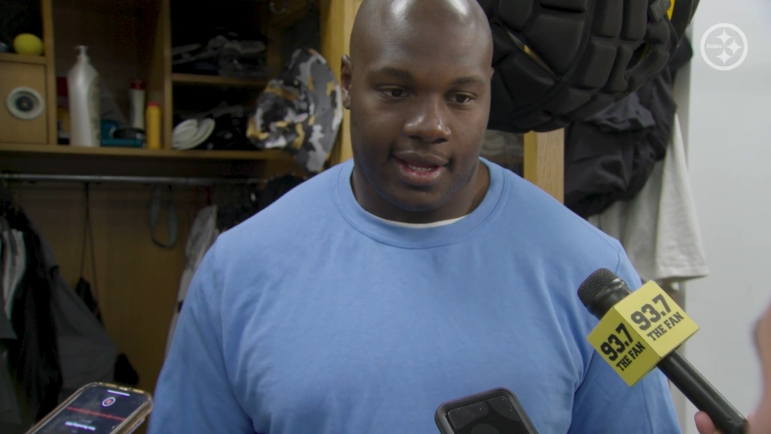 ‘Spark’ has been a buzzword surrounding the Pittsburgh Steelers for the past couple of days. Even head coach Mike Tomlin used it, citing the need for one as the reason that he decided to insert rookie quarterback Kenny Pickett into the game at halftime, hoping that he could provide one.

He did, which is of course what you would expect any good quarterback to do, but for the rest of the group, it’s not about who’s under center, especially when it comes down to energy, motivation, and atmosphere. Veteran lineman James Daniels, for example, was asked about if the ‘spark’ Pickett provided on Sunday was transferable to future games. He said it’s not about one guy.

“The spark, I mean, we could have sparks just by executing the plays”, he responded via the team’s website, and to be frank, he has a damn good point. “It doesn’t matter who’s in at quarterback, when we execute plays, the crowd will always be behind us”.

Fans like teams that are good and who play well. If the Steelers play well, they will back whoever is on the field. Yes, they will give Pickett more of a cushion because of his background and because he’s the shiny new toy, the vessel in which all hopes for the future are placed.

But at the end of the day, if they were winning games with Mason Rudolph under center and the offense was humming, the crowd would be plenty excited about that as well. In other words, you can create your own spark just by doing your job at a high level.

“Yeah, it is nice that the crowd did have the energy, but sometimes I feel like it’d just be easier on our offense and on our team if we just execute our plays better so we don’t need the crowd to get behind us”, Daniels added, a rather sobering remark. “They’ll get behind us because of how we’re playing”.

There is an unmistakable realization throughout that locker room that neither side of the ball is doing what it is supposed to do, at least consistently enough, to get the job done, let alone to be happy with the finished product.

There is still a lot of growth left to take place, growth that needs to happen. Now that growth will be happening with Pickett under center rather than Mitch Trubisky, but the task at hand remains the same. Everyone has to be better individually, and has to work together more coherently.