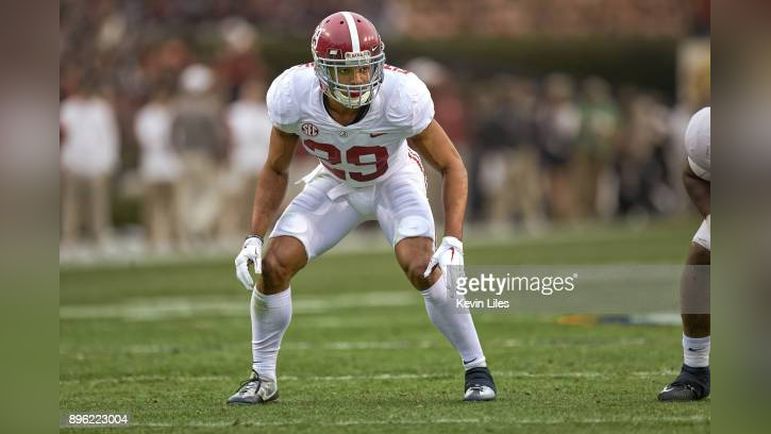 As the Pittsburgh Steelers prepare to face the Philadelphia Eagles, the team’s All-Pro safety Minkah Fitzpatrick will face his former college quarterback. That is, Fitzpatrick’s tenure playing for Alabama overlapped with that of Eagles quarterback Jalen Hurts in the 2016 and 2017 seasons. When asked about Fitzpatrick, the Eagles quarterback had high praise.

“Thirty-nine [Fitzpatrick] is a guy you know where he is on the field,” Hurts said when asked about his former teammate on Thursday, as transcribed by Steelers.com’s Teresa Varley. “I have a lot of respect for him, knowing him personally, knowing the type of man he is, the character he has and the work he puts in. I remember a lot of nights where it was Saturday night, Friday night and everybody is out and I think I am the only one going to the weight room, to the field to do extra work, but Minkah was there too.”

Dating back to his college days, Fitzpatrick’s career accolades speak for themselves. The former Alabama safety nabbed two Consensus All-Americans and two First-team All-SECs his sophomore and junior seasons. As such, he was the 11th overall pick by the Miami Dolphins in the 2018 NFL Draft. Fitzpatrick was traded to the Steelers early in his second season, earning two first-team All-Pro selections to add to his decorated resume.

With this in mind, it’s no surprise to hear Hurts boast about his former teammates’ work ethic. Hurts is having what may be a breakout season in his third year, leading the Eagles to the league’s only undefeated record. Hurts enjoys a top-tier receiving core that features recent top-10 pick Devonta Smith and Pro-Bowler A.J. Brown. Hurts also plays behind an offensive line that ranks in the top six in pass and run blocking according to ESPN. All of this is to say, Fitzpatrick and the secondary will have their work cut out for them.

“He plays defensive back,” Hurts continued. “And he would go out there and run routes for me. That is how versatile he was. A lot of respect for Minkah. He has been making big-time plays since I have known him.”

Indeed, Fitzpatrick has a knack for making big-time plays. After the team traded for him in 2019, he has made an impressive number of game-winning plays for a safety. To see Fitzpatrick’s versatility and big-time play making ability, one needs to look back no further than Week 1 of this season, where he blocked a game-winning PAT against the Cincinnati Bengals.

The role Fitzpatrick played in shaping this Steelers team cannot be understated. After the team traded for him in 2019, the team’s defensive play improved significantly from its 33-3 loss to the New England Patriots to begin that season, and has continued to ever since. After that game, head coach Mike Tomlin seemingly embraced a defense-first mentality, which remains the team’s philosophy today.

This franchise is accustomed to elite safety play, as Hall of Famer Troy Polamalu played for the team for 11 seasons. Similar to Polamalu, Fitzpatrick routinely makes instinct-motivated and unorthodox plays, many of which wind up working out. For now, in a situation where the season may just be on the line at 2-5, the Steelers will need Fitzpatrick to be on his A game against his former teammate.