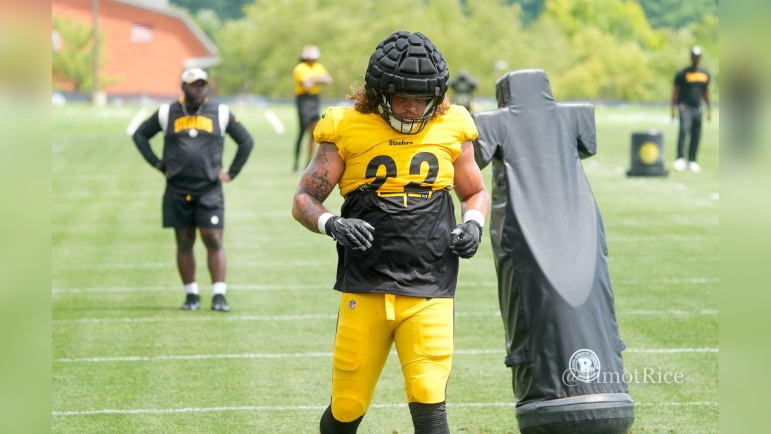 After playing extensively his rookie year, Isaiahh Loudermilk couldn’t get a helmet for the first five weeks of the season. That’s going to change this weekend. Based off his comments to reporters and the Pittsburgh Steelers’ ugly injury report, Loudermilk will dress Sunday afternoon against the Tampa Bay Buccaneers.

Loudermilk will replace DeMarvin Leal, surprisingly ruled out after suffering a knee injury on Friday. Loudermilk won’t be able to replicate Leal’s role as a rush-end player but he will occupy his helmet.

“I just knew I had to wait for my opportunity,” he told reporters via The Trib’s Chris Adamski. “I knew it would come eventually.”

As a rookie, Loudermilk played more than the team expected him, logging nearly 300 defensive snaps as the Steelers were crushed by defensive line injuries. He showed growth throughout his 2021 season, holding his own against the run and impacting the pas game by getting his hands in throwing lanes. He finished his rookie season with three pass deflections.

But with the additions of Leal and Larry Ogunjobi along with Tyson Alualu’s return, Loudermilk found himself odd-man out the first five weeks, the lone inactive in the room. Injuries are forcing the Steelers’ hand but Loudermilk will try to improve a middling Steelers’ run defense. He’ll also look to show his progress as a pass rusher, looking more refined this summer. Pittsburgh has just three sacks over the last four games, a pass rush that’s gone MIA after T.J. Watt landed on IR.

Here’s what we wrote about Loudermilk exiting camp:

“A more focused pass rusher is the biggest takeaway I’ve seen from his game. Loudermilk is understanding how he wins getting after the quarterback, doing it with power. Bull rushes, push/pulls, and using the occasional swim once he’s established power. It just made him a more effective player and gives him the best chance at being a three-down player. Still, he’s not a toolsy pass rusher and shouldn’t have a significant role in sub-packages. Not with guys like Cam Heyward, Larry Ogunjobi, DeMarvin Leal, and others on this team. Loudermilk’s run defense was solid though staying low and not getting uprighted, an issue due to his height, is still an area of his game’s he’s trying to iron out.”

Loudermilk is likely to play as a base defensive end, rotating snaps with Chris Wormley and Larry Ogunjobi. How many snaps he’ll see remains an open question. He can’t act as the standup linebacker Leal functioned as. Perhaps the team tries to run more four-down fronts in order to minimize its lack of depth at outside linebacker. They’ll have to come up with a winning formula to snap their four-game losing streak and avoid starting 1-5 for the first time since 1988.