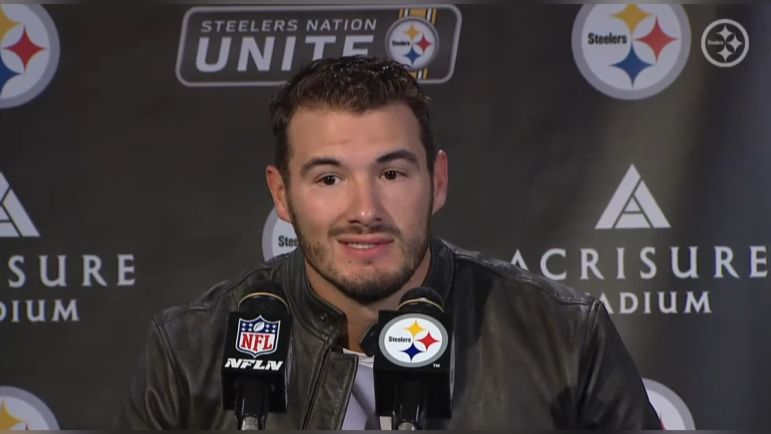 Early in the third quarter of the Pittsburgh Steelers 20-18 win over the Tampa Bay Buccaneers, Steelers rookie quarterback Kenny Pickett took a hit from Buccaneers linebacker Devin White, and hit his head hard on the ground. Pickett was taken out of the game and eventually ruled out with a concussion, and in his place came Mitch Trubisky. Trubisky started Pittsburgh’s first three games of the season, but he was pulled in the second half of the Week 4 matchup against the New York Jets in favor of Pickett. Trubisky responded though, leading the Steelers on a touchdown drive and picking up key first downs with the team leading by two to clinch the win. In his postgame press conference, Trubisky talked about how he felt coming into the game.

“I was ready to go. In those situations, you just got to be ready when your number’s called. I just wanted to come in and help the team win any way I could. Just tried to come in, do my role, and lead the guys, everybody stuck together. They had my back when I came in as well, it was fun to see, we all kind of rallied around,” Trubisky said in his postgame press conference via the team’s YouTube channel.

Trubisky’s first two drives looked like more of what we saw from him earlier in the season. While he had a 16-yard completion to Chase Claypool on his first drive, the Steelers couldn’t sustain the drive and punted, and Trubisky’s second drive was a three-and-out. Something clicked on the third drive though, and with the Steelers using tempo, Trubisky was able to hit tight end Connor Heyward for a 45-yard gain on a free play, with Vita Vea unable to run off the field in time. That drive ended in a touchdown pass to Claypool, and then with 4:38 left and a two-point lead, Trubisky engineered a drive to kill the rest of the clock, converting on both 3rd and 15 and 3rd and 11.

The last two drives looked like the guy the Steelers thought could be their starting quarterback this year. Trubisky played clean, turnover-free football and made good reads and was able to convert in the clutch. It was fun to watch him make plays and do what he had to do to help the Steelers win the game. He finished with a stat line of 9-12 for 144 yards and a touchdown.

While a win is fun, especially when it comes against Tom Brady, the Steelers are still 2-4. There’s a lot of football left, and the next two weeks will be important for determining how the rest of the season goes. Next Sunday, Pittsburgh will take on the Miami Dolphins before a date with the Philadelphia Eagles before the bye week. Lose both of those games, and it’ll be tough to battle back from 2-6 after the bye. Win just one, and it still won’t be an easy path to the playoffs, but you can at least see a very tiny sliver of a chance for Pittsburgh to sneak in if they enter the bye at 3-5.

This team played one of their best games of the season today down almost their entire starting secondary and with their backup quarterback playing half the game. It was a gritty, hard-fought win, and one that hopefully leaves a lot to build of these next few weeks as the Steelers look to continue to play winning football.