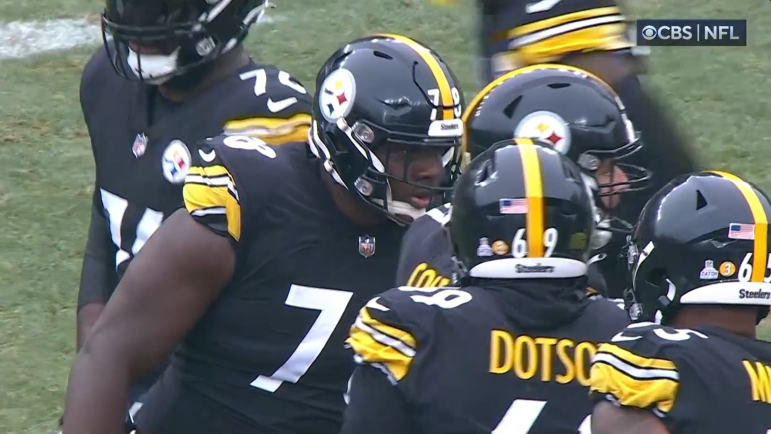 It was a common theme Sunday at Acrisure Stadium in the Week 4 matchup between the Pittsburgh Steelers and New York Jets. With the black and gold in the stands, and the yellow Terrible Towels waving in unison, there was also a lot of yellow laundry littering the field throughout the 24-20 Steelers loss to the Jets, often against the Steelers.

Eight times the Steelers were penalties on Sunday for 55 yards, many of them coming on offense, which hindered some drives for the black and gold, drawing the ire from head coach Mike Tomlin after the game.

Of those eight penalties, five were called on the Steelers’ offense for 30 yards. One other penalty was declined against the Steelers’ offense, wiping out the infraction. Out of those five penalties, two were for illegal linemen downfield on James Daniels and Kevin Dotson, one was a false start penalty on Dan Moore Jr., one was an illegal shift on Diontae Johnson, and one was a holding penalty on Dotson.

That’s simply not good enough from an offense that was already struggling to score points. Granted, the team had just one penalty called on it in the second half with possession of the football, but once again the infractions really made it difficult for the offense to sustain drives, leading to some attention from Tomlin after the game in his post-game press conference.

“We gotta perform better. And I’m talking about the collection of players and coaches in there,” Tomlin stated to reporters following the loss, according to video via the Steelers official YouTube page. “It’s very tangible and fundamental things. I thought we were highly penalized, particularly in the first half. I thought it killed some drives.”

Offensively, the first penalty of the game on Daniels being illegally downfield wiped out a 14-yard pass from Mitch Trubisky to George Pickens that moved the chains and instead turned it into a second and 12. Two plays later, Pressley Harvin III punted the football away.

On the fourth offensive drive of the game, the Steelers were called for their second offensive penalty as Dotson was called for a hold, wiping out a four-yard run from Najee Harris on second and 7, turning it into a second and 16. Fortunately for the Steelers, Trubisky found Pickens over the middle for 26 yards to erase the penalty.

The very next possession Johnson was hit with an illegal shift penalty, turning it into first and 15. The Steelers then ultimately punted the football away three plays later.

For good measure, on the next drive Moore Jr. was called for a false start, and then allowed a sack on the very next play.

It wasn’t anywhere close to good enough, or even disciplined enough from the Steelers on the afternoon, which is becoming a major concern with the Steelers’ offense early in the season. Not only are they struggling to sustain drives, they’re struggling to stay out of their own way.

How it gets fixed is anyone’s guess right now. The illegal man downfield penalty is hit or miss depending on the officiating crew. The Steelers were called twice for it on Sunday, as were the Jets, though New York got away with it more often, especially in the first half.

Penalties are a killer for this offense right now though, and it’s something they desperately need to avoid.