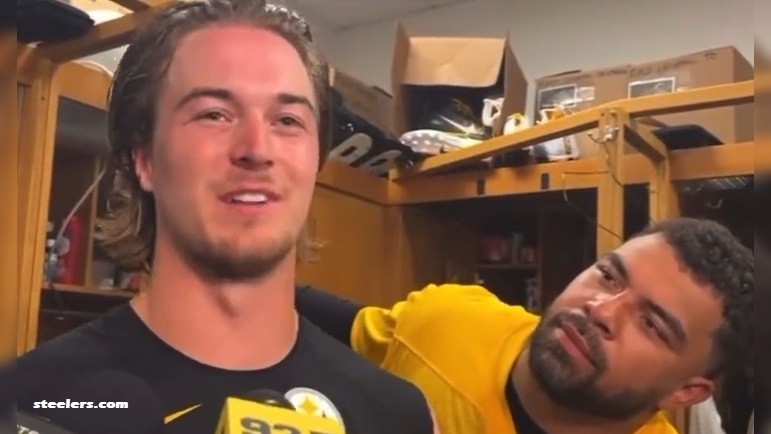 The Pittsburgh Steelers now have their presumptive quarterback of the future in place, in the starting lineup, on the field—you know, actually playing football. What next?

Finding the guy you think will be your quarterback for years to come doesn’t solve all problems. Indeed, it’s merely job one. If you don’t have the quarterback, you’re probably not winning. But you’re not winning without a team around him, either, and that’s the message Cameron Heyward has in a released bit of his next podcast, Not Just Football. “I’m of the belief that it takes 11 to play good. It’s not just the quarterback”, he said.

It’s not just Kenny who has to be accountable for a Steelers win. It’s everybody. And I think everybody’s on the edge of their seat to see Kenny Pickett, but Steelers wins come from the entire team, and I would hate for him to be in a position where he has to carry the load of, you live or you die. You ride with Kenny Pickett, and if he makes a mistake, the team loses—that’s not how this game works. It comes down to 11 men executing play in and play out.

There’s gonna be some growing pains. Kenny’s gonna have to learn some things that happen during a game. It’s way different from preseason. It’s a different brand of football, even from college. We’re gonna ride with Kenny. Kenny, Mitch, Mason, whoever’s out there, all 11 have to be responsible for the wins.

But are they going to ask him to throw the ball 40 times a game by design? I wouldn’t bet on it. But they will have to continue to work on the ground game to make that a more efficient complement to what they’re trying to do in the passing game.

One thing that will help is George Pickens playing a larger role. Much will be made about the fact that Pickett targeted him more, but the real story was the fact that the Steelers were expanding his assignments and his route tree.

It’s interesting that Diontae Johnson wasn’t much targeted once Pickett came into the game, and we’ll have to see how that evolves. He may be the player on offense with whom he has gotten the least amount of work, so perhaps that’s something that has to be ironed out on the practice field to build that comfort level.

Even more important, of course, is the defense stepping up. They were able to do that in 2019. They aren’t doing it this year so far, not in the way that they need to. Getting T.J. Watt back, whenever that is exactly, will be a major boost, but they are entering a very tough stretch in their schedule right now, so it’ll be baptism by fire for the rookie no matter what the other 10—or 21—do.