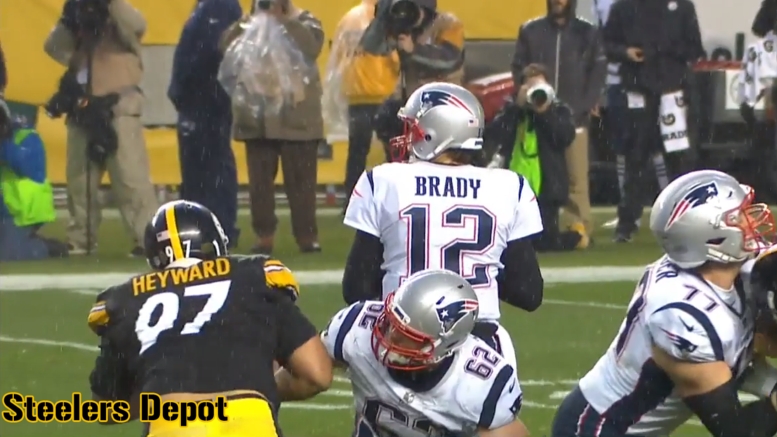 The Pittsburgh Steelers are in the midst of a four-game losing streak. And now they have to play Tom Brady, the man who has beaten them 12 times in 15 games. But they have never played him as a member of the Tampa Bay Buccaneers, as he is now. That will be new. But what about preparing for him?

“I don’t know if it’s that much different in that approach, because wherever he’s been, he’s been the guy”, Steelers defensive captain Cameron Heyward said on the latest episode of his podcast, Not Just Football. “In all these years I’ve just learned to have more and more respect for what he’s done in this league. His preparation, the way he takes advantage of the game. He understands pace and how to use it to his advantage”.

Brady hasn’t been tearing the league up this year with the Buccaneers, but he’s still been largely efficient. He leads the NFL in completed passes with 141 on 207 attempts, and has thrown for 1,409 yards. While he only has seven passing touchdowns, he has only thrown one interception.

His first two seasons in Tampa Bay were not without fireworks. In those 33 games combined, he went 886-for-1,329, thrown for 9,969 yards with 83 touchdowns to 12 interceptions. They won the Super Bowl in his first season with the team in 2020. Though they flamed out in the playoffs last year, they still won 13 games, something he’s always been able to do throughout his career.

He does have more ‘name’ talent around him than he did for most of his tenure in New England, including wide receivers Mike Evans and Chris Godwin, and running back Leonard Fournette. Yet the offense is only averaging about 20 points per game through five weeks, good for 19th in the league. But the Steelers aren’t assuming he won’t put points up on them.

“Brady knows how to find everybody open”, Heyward said, as he’s made a career out of making careers for others who might not otherwise have ever been a known commodity. “If you assume you’ve got Brady in a certain check or anything, guess again. That dude has played too much football and understands everything”.

The last time the Steelers played Brady, it went nearly as badly as Sunday’s game did against the Buffalo Bills, a 33-3 affair in Foxboro back in 2019. Hopefully Sunday’s game won’t be nearly as bad, but it’s no surprise that they’re once again underdogs.