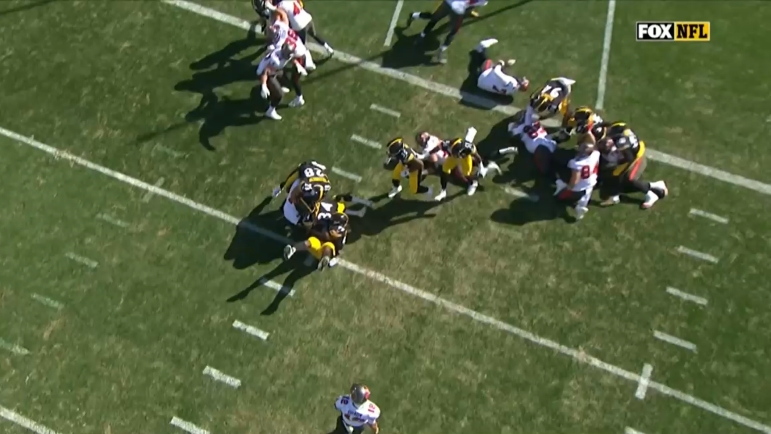 Situational football. It’s the difference between winning and losing games. Third down, red zone, end of game. And the Pittsburgh Steelers won all those critical moments. Discussing the win on the latest episode of his Not Just Football podcast, Cam Heyward credited the Steelers’ defense for stepping up and stalling out Tampa Bay drives.

“I thought the red zone defense was humongous,” Heyward said on his latest show. “I thought we did a great job getting off the field on some third downs.”

The Buccaneers started the day 0-3 in the red zone and finished just 1-4. Tom Brady may have driven the offense downfield but Pittsburgh forced field goals, not giving up touchdowns, a crucial part in keeping the score down in a game the Steelers won by just two points.

Tampa Bay’s first red zone drive found themselves in 1st and 10 from the Steelers’ 17. But Brady threw incomplete three straight times to force a Ryan Succop field goal. Myles Jack had the play of the possession, getting depth as a zone dropper and tipping Brady’s pass down the left seam to TE Cameron Brate. Had Jack not done that, it almost certainly would’ve been a touchdown.

The Bucs got even closer on their next possession. 1st and Goal from the three, Cam Heyward beat rookie left guard Luke Goedeke to tackle Leonard Fournette just shy of the goal line, a great defensive stop on a play in which the Steelers had just ten defenders on the field. Larry Ogunjobi defeated a cut block the next play to tackle Fournette for a loss, another big-time run stuff, while Heyward bull rushed Goedeke on third down to record his first sack since Week 1.

Midway through the third quarter, Tampa Bay again drove down near the goal line with 1st and Goal from the four. A busted play and ineligible man downfield pushed them back five yards. Terrell Edmunds had a great knifing tackle for loss with Brady throwing incomplete on second and third down to force another short field goal.

Those stops proved to be the difference in the game. It gave the offense cover after struggling after an opening-drive until Mitch Trubisky offered a second half boost, hitting Chase Claypool for a fourth quarter touchdown.

Heyward expanded on the great play of the defense overall.

“Great pressure up the middle. Larry Ogunjobi played very well. Alex Highsmith had a sack. I thought there was good pressure so [Brady] had to feel a little uncomfortable. I think our linebackers played very well. Spillane, Myles Jack, Devin Bush.”

In addition to great red zone play, Tampa Bay went just 4/14 on third down, more than ten points lower than their seasonal average heading into the game.

Pittsburgh will need more performances like that going forward. They’ll have a tough task on the road this Sunday against the Miami Dolphins. QB Tua Tagovailoa returns after missing two weeks with a concussion. Though wide receiver Jaylen Waddle is dealing with an injury, Tyreek Hill is one of the game’s biggest playmakers while Miami has plenty of speed at running back with Raheem Mostert, one of the league’s fastest runners.