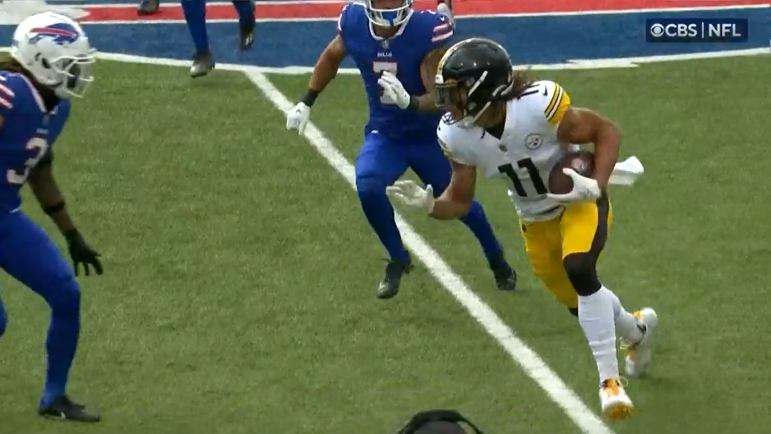 The Pittsburgh Steelers had three turnovers in their 16-10 loss to the Miami Dolphins on Sunday night, while forcing zero Miami turnovers. It wasn’t as if the Steelers didn’t have their opportunities though, as the team had four dropped interceptions. Levi Wallace had two, while Terrell Edmunds and Cameron Sutton both dropped one each. The defense also couldn’t get much pressure on Tua Tagovailoa, as they didn’t register a single sack. Pittsburgh’s defense generally played well though, but the offense struggled, only registering two explosive plays on the night. Defensive lineman Cameron Heyward said the lack of splash plays is what led to Pittsburgh’s loss.

“We didn’t make enough splash plays on both sides of the ball to win that game. It came down to the end. You’re beating your head because you’re like, damn, we had so many opportunities to really seize that moment,” Heyward said via Mike DeFabo of The Athletic.

Defensively, it sure would’ve been nice if the Steelers could’ve forced a turnover, especially given how many chances they had to do so. But the lack of splash plays offensively is what killed them. The defense didn’t allow Miami to score in the second half, but Pittsburgh’s offense couldn’t take advantage and time and time again had to punt or turned the ball over with them trailing 16-10 the entire second half. The two times that Pittsburgh got in range score, quarterback Kenny Pickett threw an interception. Miami took advantage of their opportunity to make splash plays, while Pittsburgh just couldn’t do so.

Offensively, it helps that Miami has the speed of Tyreek Hill and Jaylen Waddle, but Pittsburgh has playmakers too. They just haven’t been able to get the explosive plays or the splash plays that they need to move the ball. Wide receiver Chase Claypool lamented the lack of splash plays.

“It’s a little harder to score when it’s like a 10-15 play drive, because everything has to go right. If you’re nickel and diming, you get five yards per play, which is fine for time of possession, but sometimes we just want to go score now,” Claypool said via Brooke Pryor of ESPN.

It’s been a problem for Pittsburgh all season, regardless of Kenny Pickett or Mitch Trubisky being under center. It’s one of their biggest problems offensively and a big reason why the team is 2-5. There’s been too much dink and dunk, and Pickett tonight had just five passes of 20 or more air yards, and two of the five were intercepted. One was incomplete to Johnson on the first drive on a bad throw by Pickett, and the others were a 30-yard completion to George Pickens and a 21-yard completion to Freiermuth.

You can argue that Pickett’s playing it safe because he’s a rookie, but given that it’s been an issue all season, I think the problem at this point is there just isn’t an opportunity to make those downfield throws. In addition, there isn’t much room for yards after catch with the routes Pittsburgh is calling, which limits the ability for explosive plays.

At this point, the offense just isn’t getting it done. You can’t win a game only scoring 10 points, and Pittsburgh is the only offense in the NFL that hasn’t had three touchdowns in a game this season. Something has to change, and soon, if they want to somehow salvage this season.