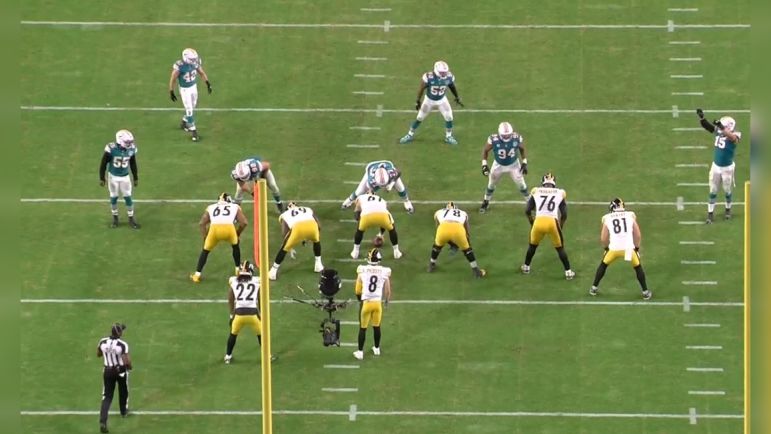 For a brief couple of moments Sunday night against the Miami Dolphins, the Pittsburgh Steelers found some semblance of a running game. They leaned on one scheme for a couple of decent runs. To the coaching staff’s credit, they’ve thrown a lot at the wall to try and jumpstart their run game. Not much has worked but against the Dolphins, their G-Lead run scheme produced promising results.

So what’s G Lead? That’s power/gap run with the frontside guard pulling. Traditionally, the backside guard pulls but on G-Lead, it’s the guard to the run side. Here’s the first and best example. Here, RG James Daniels pulls on this run to the right. RT Chukwuma Okorafor down blocks on the 3T while center Mason Cole also climbs to the second level to take the playside off-ball linebacker. Left guard Kevin Dotson reaches and cuts off the NT. A brief outline of the blocking scheme on the frontside of this play. 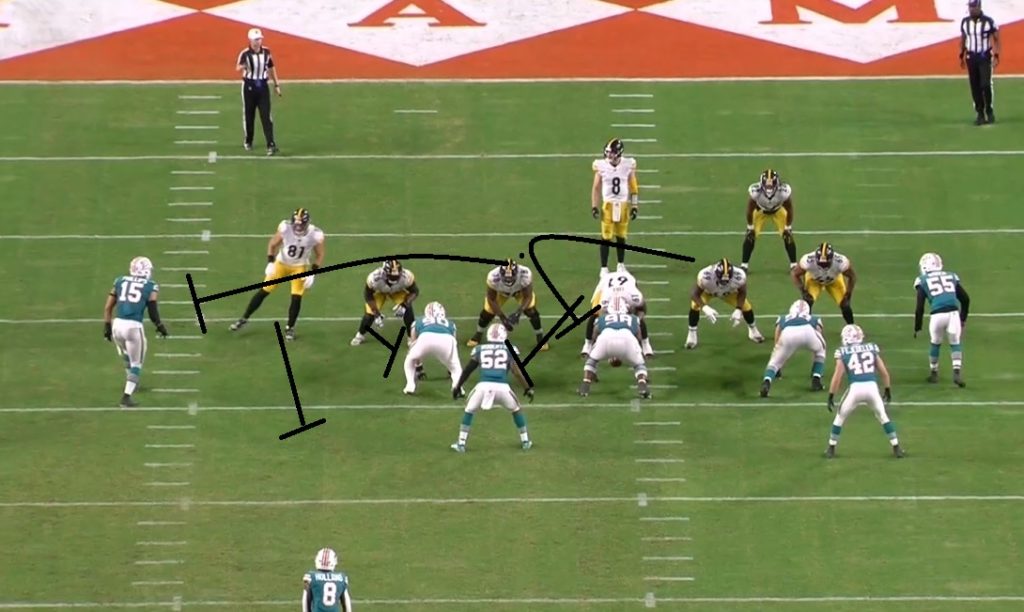 The team also uses jet motion and brings WR Chase Claypool across the formation on the snap of the ball to help freeze and slow up the linebackers from flowing with the play.

On the snap, Daniels kicks out the LDE, Okorafor down blocks the 3T, and Dotson does a nice job on the 0T, a hard block to make for a linemen. Najee Harris runs through the lane between Daniels and Okorafor and even with Zach Gentry falling down here, Harris has a lane. He’s 1v1 with the DB, a matchup the Steelers want, and it goes 16 yards, one of his best runs of the season. George Pickens’ downfield block helps, too.

Pittsburgh goes back to G-Lead a short time later. It’s schemed up slightly different with Gentry kicking out the EMOL while Daniels pulls through, probably because the LDE is aligned wider here or because Gentry tripped before and they were trying to avoid that this time. This play isn’t as successful, Okorafor’s steps don’t seem correct and he allows penetration while Dotson can’t reach and completely cutoff the nose tackle. Again, a tough block, and I’m guessing this G-Lead could only be used against a head up NT and not a 1T shaded away from Dotson.

Pittsburgh called it one more time in the fourth quarter. This time with success similar to the first play. Gentry climbs to the second level with Daniels kicking out the RDE. The play is a little messier with Cole unable to climb to the second level but the first-level push is enough to carry into the linebacker, forcing him to work through trash, as Harris is able to turn the corner for a solid pickup.

Here’s a look at all three examples of G-Lead from the game.

Overall, it was the team’s most effective run scheme of the night and provided a solid chunk of Harris’ 65 rushing yards. Pittsburgh’s run game has still been pulling teeth all year long and they certainly haven’t found consistency or an identity. But maybe this is something to build off of, though it works better against 3-4 fronts with less penetrating and athletic linemen. Probably not something you want to try against the Eagles’ 4-3/five-down front with athletic guys up front like Fletcher Cox, Milton Williams, and Javon Hargrave.