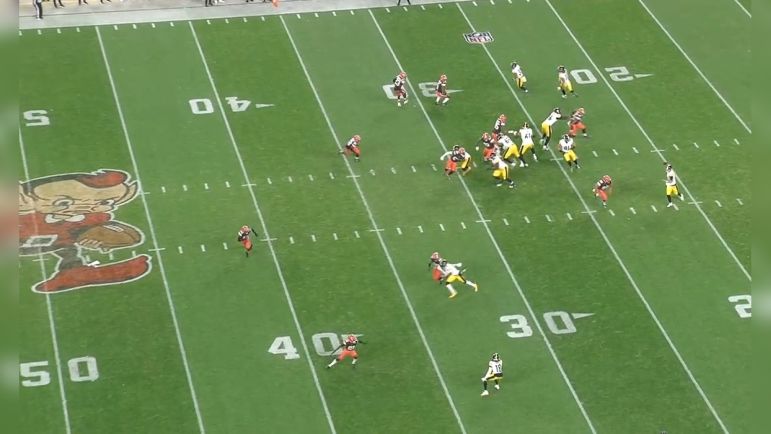 We’re back talking Matt Canada. After highlighting his predictability in the Buffalo Bills game, I want to zoom out and talk about Canada’s favorite playcall: his sprint out to the field side of the field. In simplest terms, I’m talking about the plays in which the quarterback rolls outside and quickly throws the ball along the sideline. Here’s an example.

I’ve gone back – and will argue I’m entitled to financial compensation – and watched every single snap the Pittsburgh Steelers have run this season. Through five games and 181 pass attempts, they have run this play 17 times. That’s 9.4% of all the team’s passing attempts, a staggeringly high number for such a low-reward play.

Today, I’m going to break it down every which way to see how and when Canada uses this concept.

Out of the 17 times he’s run it this season, here’s the game-by-game breakdown.

He’s used it at least once in every game but when it comes, it’s used in bunches. Six against the Browns, six Sunday against the Bills. It’s a concept Canada has leaned on more since Week One. From Weeks 2-5, this sprint out makes up for 11.2% of all this team’s pass attempts.

Now, Canada uses this call in specific situations. It’s something he leans on early downs and behind the sticks (1st and 10, 2nd and long) to try to stay on schedule or get back into a manageable situation, turning a 2nd and 9 into say, 3rd and 4. I’ve charted the plays into down and distance. First, a look at down.

First Down: 6 Times
Second Down: 9 Times
Third Down: 2 Times

These concepts are run to both sides, the left and right, but almost always to the open side of the field to give the quarterback more room. 16 of the 17 (94.1%) have come to the open side with the only exception coming at the end of the 1st half against the Browns, the Steelers trying to get a quick five-yards and out of bounds. But the Browns played the sideline and the play failed.

What about by distance? Another clear trend.

There are two route combinations off this sprint out: a curl/smash and a speed out. Here’s the breakdown of each:

Canada started the season off with the speed out, run all four times over the first four games but has fallen back on the curl/smash recently, including all six plays in Sunday’s loss to the Bills. The corner route in the smash (curl/corner) is rarely targeted, it’s a low-high read, only thrown to once late last week. The pass was incomplete.

If there’s credit to be given to Canada, it’s a high-percentage play. It has been completed most of the time. Here are all 17 of these plays. By the way, this doesn’t even count the four shovel options that had this route attached. So you can argue this 17 number is on the conservative side of things.

Canada has built no concept off it and it feels like a matter of time until a defender jumps this route and makes a play on the football.

While it’s regularly gained five yards a pop, that’s the downside to it too. It’s the old joke. If you need five yards, it’ll get you five yards. If you need eight yards, it’ll get you five yards. There’s no chance of YAC. The speed out carries the player out of bounds and the curl is often contested by the corner. Guys like Diontae Johnson, capable after the catch, are limited. These are safe sideline calls that gain a couple yards and nothing more.

It’s really surprising Canada hasn’t used them in the most logical situation. Short-yardage. 2nd and short, 3rd and short. If the goal is to move the sticks, to get five yards, then run them on 3rd and 3. As we noted, he’s run them on third down just twice all season, one of which we mentioned – the halftime play against the Browns. That came on 3rd and 10 and the Browns easily countered. The only other was also in the Browns’ game, a 3rd and 5 that failed and the Steelers were called for OPI.

Still, it’s a logical call. This is a team so bad on possession downs and have had ample chances to convert in manageable situations – they’re tied with the Detroit Lions for the most pass attempts on 3rd and 1-5 with 28. Yet only one has been this sprint out, the best time to actually call it. There’s a reason why their conversion rate is so low in those situations, tied 24th.

It’s a lot of information so let me recap.

These are plays I’d expect a bad high school offense to lean on. Not a NFL one. Coupled with what we wrote yesterday, Pittsburgh’s pass game is so watered down to a couple of concepts that don’t stress defenders without constraint plays to work off of, either in concept, formation, or personnel grouping, that they’ve become a boring and frustrating offense to watch.

I wanted to be optimistic about Matt Canada this year, treating 2022 as a clean slate. Not all of this team’s ills fall on him. Players have regularly failed to execute and he’s rolled through two quarterbacks already. My point here, as it was yesterday, was slightly less about the effectiveness of the plays but how often they’re called for middling returns. To show how few concepts this team actually has. This team has a razor-thin playbook that might work in the college game where talent can win out or where you’re dealing with 19 and 20 year olds trying to pick up an offense. It doesn’t translate well to the next level. Canada’s concepts aren’t unique, a lot of the league runs this stuff, heck, a lot learned it from him in college, but they’ve been able to build off it. Canada hasn’t. And that’s a problem.

Update: As a couple of you asked, here are the results of the play. My focus was more on the predictability aspect but here are the stats. One play I’ve thrown out due to penalty.