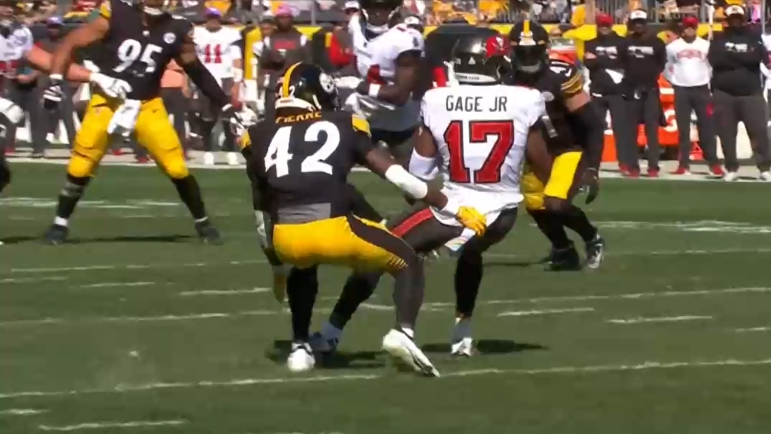 There were a plethora of players that stepped up to fill the shoes of injured Pittsburgh Steelers up and down the depth chart Sunday against the Tampa Bay Buccaneers. One of the guys at the top of that list was third-year cornerback, James Pierre. As an undrafted rookie in 2020, Pierre was praised for his play down the stretch and eventually got the nod over third-round rookie Justin Layne in the wild-card game. This praise turned into expectations for coaches and fans alike heading into year two. Those 2021 expectations were only heightened when Pierre claimed the cornerback position opposite of Joe Haden when the team went into sub-packages (Cam Sutton bumped inside).

Pierre would find himself picked on by opposing offenses early. Per SIS, through the first five weeks of the season, he would give up a team-leading 13 catches, 207 yards, and 2 touchdowns. His role would eventually decrease until the week 12 game against the Cincinnati Bengals where he would again get gouged for 5 catches, 89 yards, and a touchdown on 7 targets. Pierre never saw another defensive snap the rest of the season as Ahkello Witherspoon replaced him in the lineup and never looked back.

Now, due to injury, Pierre was forced into action again, this time against the greatest quarterback of all time, Tom Brady. However, Pierre would prove he was ready to step up to the plate.

Per Pro Football Focus, these were Pierre’s week 6 coverage stats:

An extremely solid stat line for a CB4 forced into a starting role. Let’s take a look at his tape.

The Steelers smartly didn’t put their cornerbacks on islands much in this game. In this particular play, the Steelers are in 2-man. With the help over the top, Pierre plays a trail technique. He sticks in Chris Godwin’s hip pocket and reads his hips as he breaks down for the comeback, leaving Tom Brady nowhere to go with the football. This is easily my favorite rep of the day by Pierre, a really impressive rep.

This is time, Pierre is playing man against Breshad Perriman. Perriman is running a dig. Pierre shows off the smoothness in his hips and drives on this dig immediately. The throw is low, but I’m not sure it should have mattered as Pierre was all over this one for the pass breakup.

Let’s take a look at Pierre covering another dig, this time by Russel Gage. Gage, has a lot more wiggle than Perriman and gives a nice “rocker step” at the top of his route. I think Pierre may have gotten lucky on this one, in my opinion. While he does have some help inside, he lets Gage cross his face too easily, even weaving toward the sideline during his backpedal.

You do have to give some credit to Pierre, he never gives up on the play and shows off his makeup speed by being able to get in there and affect the catch. While I think it was ultimately Brady’s low throw that caused the incompletion, Pierre still was right there.

Gage’s releases did give Pierre some trouble throughout the day with his inside breaks. In this clip, you can see Pierre lunges outside and then stumbles, leaving Gage wide open. Pierre again doesn’t give up on the play tackling Gage for little to no YAC.

The next clip is another end-zone target going at the Pierre vs. Gage matchup. I love how calm Pierre is through Gage’s release, never lunging, just staring at his belt. He then, leans on Gage, easing him towards the sideline to give Brady hardly any room to fit this one in.

I don’t love that he loses track of the ball and the receiver at the catch point, but his work in the first part of the rep is ultimately what wins it for him. Gage isn’t able to catch the ball and his feet would have been out of bounds regardless.

Pierre really impressed me with his work in zone coverage. It was something I was reminded of last week in Buffalo.

In his first defensive snaps of the season, nice play by James Pierre here.

Playing cover-2, he "midpoints" the two receivers in his zone and forces a throwaway from Josh Allen. #Steelers pic.twitter.com/NH5HOXeGbC

This week was no different.

Here, the Steelers run a Tampa-2 look against a Y-Flex Trips Bunch look. Pierre and MLB Robert Spillane effectively switch spots. Pierre does a great job getting inside quickly at the snap to ensure he walls off whichever receiver goes vertical. Once, he sees it’s the point man, Mike Evans, he makes sure to get in his hip pocket, leaving no chance for a throw.

Below is another zone clip. This time Pierre is running his normal cover-2 spot. He carries the outside receiver vertical enough, then drives on both receivers starting to enter his zone. Pierre has no idea this ball is even tipped as he’s going for a knockout blow the entire way.

What occurs is a perfectly timed hit just as Godwin is reaching for the tipped ball. You can Godwin starting to alligator arm this, knowing the hit is coming. Pierre put his body on the line and you can tell he was feeling this hit afterward. Pittsburgh Post-Gazette’s Christoper Carter reported that he saw Pierre in a neck brace following the game, willing to bet it was from this play.

Pierre’s never been afraid of contact. It’s a big reason why he brings value as a special teamer.

He showed it again in this play taking on the bowling ball that is Leonard Fournette in the flat. While it’s not a knockout blow, and he had some help from linebacker Malik Reed, it’s still a solid play anytime you can bring down Fournette a yard or two after contact.

Let’s take a look at one last clip. Love this run rep by Pierre on the first play of the game. Taking on one of the better run-blocking receivers in Mike Evans, he is able to bench press him and then keep contain on Leonard Fournette, forcing a cutback inside where he and Myles Jack get in on the tackle.

Overall, I was impressed with what Pierre put on tape in this game. He was able to show that even though he hasn’t been getting a ton of defensive snaps he’s been continuing to develop. While I doubt you’ll see him in the starting lineup if both Ahkello Witherspoon and Levi Wallace are healthy, he’s proved himself as a great depth piece on the outside. If the situation arises where they need him again this week against the Dolphins, or further down the season, you surely feel more comfortable trotting him out there than you did after the 2021 season.