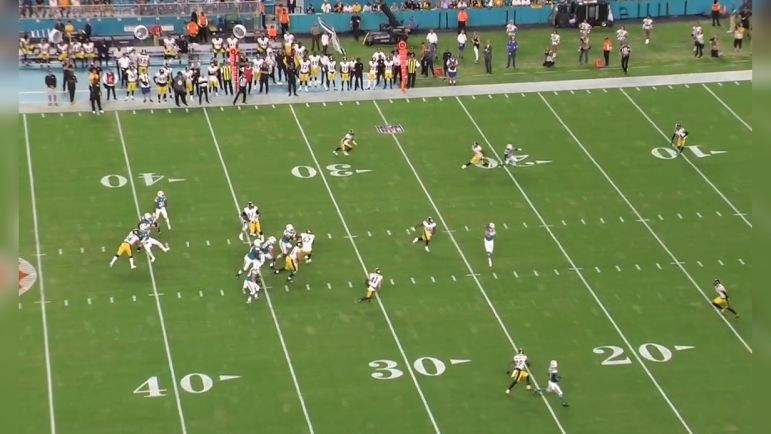 Quick film room today as I’m catching up on this weekend’s Pittsburgh Steelers’ game. Missed it live while I was attending my best friend’s wedding – first game I’ve missed in a long time but the entire Steelers Depot crew did a fantastic job. And I apologize if I’m a little rusty and/or late reacting to – another – Pittsburgh loss.

While the Steelers’ defense did well to dig their cleats in and shut Miami out in the second half, the Dolphins’ fast start was enough to win this game. It’s sad a separate issue that even allowing 16 points to a potent offense like the Tua-led group isn’t a winning Steelers’ formula but Miami was in complete control of this game in the first quarter. Dominated time of possession and racked up more than half their first downs Sunday night over the first 15 minutes.

They did so with one common thread. Attack the middle of the field. Because it was wide open.

In simplest terms, those structures and shells tell the quarterback where he should go with the ball. MOFO means the split safety look opens up the hashes and seams, the middle of the field is open and the quarterback should throw there. Safeties are playing deep 1/2 and taking away anything outside and vertical. MOFC means the quarterback/receivers have 1v1 coverage on the outside. Don’t throw down the seam against a single-high safety or else he’ll either pick off the pass or you’ll get your WR killed down the middle.

Coming into this game, Pittsburgh was well aware of all the speed Miami had at receiver. Tyreek Hill and Jaylen Waddle, two of the game’s biggest gamebreakers with Tua Tagovailoa back to get them the ball. As we mentioned during Friday’s Terrible Podcast, it seemed likely the Steelers would play a lot of two-high, a point we reiterated in our pregame prediction.

“Everyone knows about the speed Miami has on the outside in WRs Tyreek Hill and Jaylen Waddle. I imagine Pittsburgh will have a scheme, plenty of two-high, to try to eliminate the deep ball. That’ll leave linebackers solo underneath against guys like TE Mike Gesicki.”

Gesciski wasn’t a high-impact player in this game but Pittsburgh played a ton of two-high early and Miami countered by attacking the middle of the field. A lot.

Before we get into the tape, a quick look at the numbers. The weekly defensive charting we do covers just about everything you’d want to know. One aspect we track but rarely discuss is where the ball is thrown. We break the field up into five quadrants: 1 (ball left side outside the numbers), 2 (ball left side between numbers and hash), 3 (ball between the hashes), 4 (ball right side between hashes and numbers), and 5 (ball right side outside the numbers).

Against Miami, these numbers had a clear and important trend. Of Tua’s 21 completions, 15 of them were thrown between quadrants 2-4 i.e. between the numbers. Let’s break down the two sections of the field, between versus outside the numbers, to really highlight the differences.

Eleven more completions inside the numbers and an incredible near ten yard increase in yards per completion. The middle of the field is where the Dolphins won. That wasn’t by accident.

From the first half alone, here’s four clips to show Miami attacking the middle of the field against the Steelers’ two-high look. Starting with their first drive, the Dolphins wriggle out of a 2nd and 19 situation with a 20-yard completion to WR Jaylen Waddle.

Here, they use split flow action to hold and freeze the linebackers with pre-snap motion sending #14 Trent Sherfield in motion on the snap to expand and widen RCB. The #2/slot receiver Waddle runs free down the left seam and Tagovailoa hits him for a good YAC opportunity.

Look of the play from aerial and end zone views.

That gets the drive going. Later on, Miami does similar to hit TE Mike Gesicki for one of his biggest plays of the night. Pre-snap motion and window dressing to freeze the defenders at the mesh point with Gesicki running behind Devin Bush on an over/crosser route. Steelers playing two-high to contain the speed at outside receiver and Gesicki is open for an 18 yard gain.

Later in the half. Similar idea. Lots of eye candy for the linebackers on the snap of the football, FB Alex Ingold going in motion and a playfake. Steelers again in their two-high shell, rotating on the snap. Watch #10 to the bottom, Tyreek Hill, getting all the attention from the deep safeties. That opens up Waddle underneath on the in cut. With perhaps some miscommunication between Devin Bush and Levi Wallace, Waddle is open and Tagovailoa drills him for a good catch. If the throw was lower, there would’ve been plenty of YAC.

Finally, later in the half. Pittsburgh again playing two-high. To the top, slot corner Arthur Maulet is matching and carrying #2 vertical. But the Dolphins repeatedly went after Maulet, as all teams have been doing since the Jets’ game, and attack the 1v1 matchup down the middle of the field. This one hits Sherfield for a 32-yard gain and sets up a late-half field goal, crucial points in what turned out to be a tight game.

Over Miami’s first 20 plays from scrimmage, not even including that 32-yarder I just showed, the Dolphins hit five completions for 98 yards between the numbers, an average of 19.6 yards per completion. While they did most of their damage against MOFO, they did hit a couple completions against MOFC, single-high looks, throwing away from the Robber and still making big gains.

Overall, the Dolphins came out with a good plan. I’m still catching up on tape to see how Pittsburgh adjusted, it felt like Miami made a couple of mistakes, but I imagine Pittsburgh was playing a little less two-high to help stop the run and take away from the middle of the field throws, though again, the total data suggests the Dolphins still hit a ton of throws there. The damage they did early was enough to win late and they have Pittsburgh’s season circling the drain.