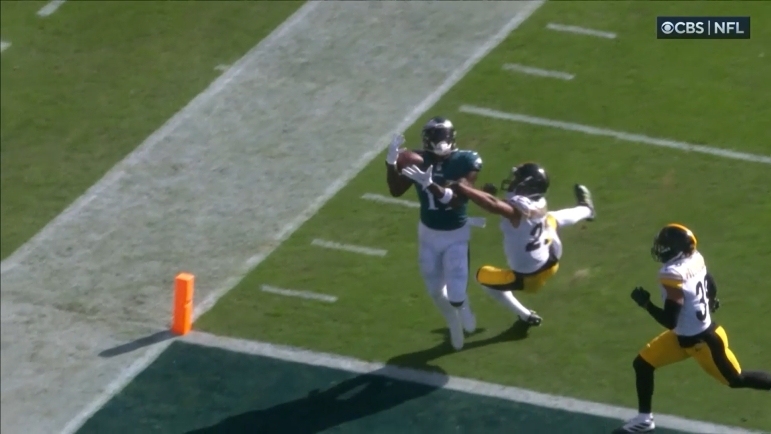 Brown, who was acquired via trade on draft day from the Tennessee Titans, consistently torched the Steelers’ secondary Sunday, hauling in touchdowns of 39, 27 and 29 yards, leading to cornerback Ahkello Witherspoon being benched for the Steelers.

One day after his dominant display against the black and gold, Brown was subject to a random drug test from the NFL, he announced on Twitter Monday morning.

The random drug test certainly doesn’t feel random for Brown, who was physically dominant all day long against a Steelers’ secondary that was relatively healthy and got its perceived top cornerback in Witherspoon back for the matchup.

Of course, playing Brown in man coverage one on one throughout the day didn’t help, as Brown became the first player since Next Gen Stats route classification began in 2018 to record three receiving touchdowns on go routes in a single game, all of which came in the first half Sunday against the Steelers.

There wasn’t much nuance to what the Eagles did on Sunday with Brown. They were able to get one-on-one matchups whenever they wanted, and quarterback Jalen Hurts took deep shots down the sideline as he pleased, testing Witherspoon over and over and over again in his return from a hamstring injury.

It went very poorly for Witherspoon, who was benched before halftime after allowing six catches for 83 yards and two touchdowns on seven targets against the Eagles.

CB Ahkello Witherspoon when targeted yesterday vs the Eagles:

That all came in the first half. Benched before halftime. #Steelers

Brown had some interesting words after the game to reporters, stating he was surprised the Steelers played him one-on-one, and that he could have had an even bigger day if he made one more play or two — a scary thing to think about.

“I think I enjoy it the most – being in single coverage. My eyes light up because I know I have a possibility to get the ball. It’s my ball or nobody’s ball. I’m kind of upset at myself because I know the opportunity late in the game, even though it was a flag, I know I could have caught that ball. Another opportunity there was a ball I had dropped, but I let the sun dictate my whole – everything. I couldn’t see the ball. I’m really kind of upset right now because I know – I had a big day, but I could have had an even bigger day if I made the most of those opportunities so there’s definitely room for improvement,” Brown said via official transcript provided by the team.

The Steelers gambled against Brown and the rest of the Eagles’ weapons, believing they could handle them one on one. They lost in a major way, so much so that the NFL is now randomly drug testing Brown. So it goes.