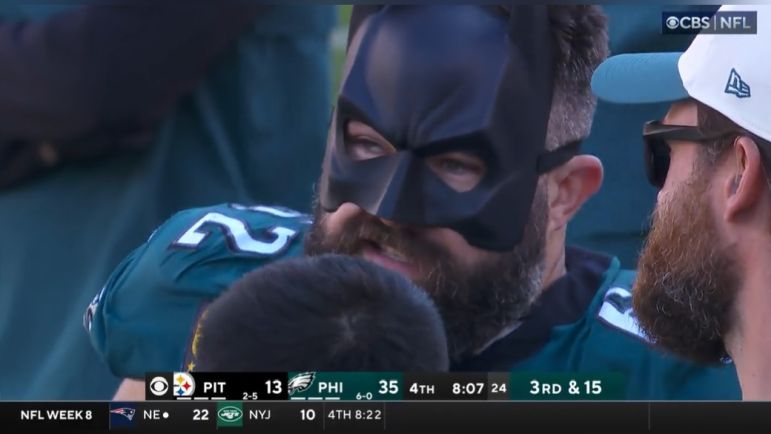 Philadelphia Eagles’ center Jason Kelce took to Twitter to clarify he meant no disrespect for his Halloween fun towards the end of Sunday’s win over the Pittsburgh Steelers. Late in the fourth quarter with the game in hand and key Eagles’ starters pulled, Kelce was spotted having fun on the sideline with a Batman mask.

That led some to criticize the decision, arguing it was disrespectful to Mike Tomlin and the Steelers. Monday, Kelce responded by saying he had no ill intent.

I have nothing but the most respect for @CoachTomlin on multiple levels, not just as a coach. The Batman theme is something our team is having fun with, especially with Halloween being tomorrow night. Absolutely meant no disrespect.

“I have nothing but the most respect for @CoachTomlin on multiple levels, not just as a coach…absolutely meant no disrespect,” Kelce tweeted in response to some of that criticism.

The CBS’ camera crew captured Kelce having fun at the end of the Eagles’ blowout victory, a 35-13 rout of the Steelers.

Kelce has one of the biggest personalities of any offensive linemen, recently teaming up with brother Travis Kelce for a new and immediately popular podcast. To the winner go the spoils and Kelce earned the right to celebrate on the sideline. None of his fun was directed at the Steelers, contained to the Eagles’ sideline and something Pittsburgh players probably didn’t even notice.

But that moment certainly sums up the Steelers’ season. Not only are they losing games, they’re non-competitive and opponents are pulling starters and joking around on the sideline. After a close first quarter, the Eagles pulled away by halftime and controlled the game throughout. Even Pittsburgh’s 22-point loss looked closer than what the game really was.

In addition to Kelce, QB Jalen Hurts and other Eagles’ starters were pulled relatively early in the fourth quarter. Pittsburgh drops to 2-6 on the season with Sunday’s loss essentially ending any slim playoff hopes the team might’ve had. Meanwhile, Philadelphia remains the NFL’s lone unbeaten team and are favorites to represent the NFC in this year’s Super Bowl.