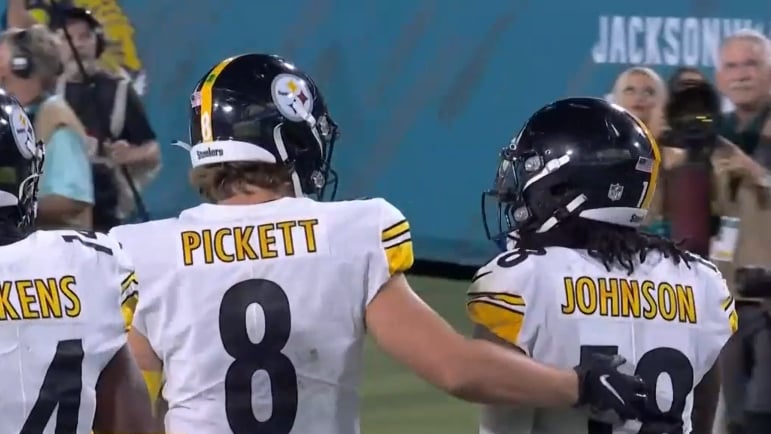 The Pittsburgh Steelers got smacked by the Buffalo Bills Sunday in New York, suffering their worst lost under Mike Tomlin by a score of 38-3. The defense was abysmal for most of the outing, letting QB Josh Allen have his way with the team to the tune of nearly 500 total yards from scrimmage before getting pulled late in the third quarter. The offense didn’t hold up any better as they moved the ball well at times down the field, but continued to stall out on third down, converting only 5-of-15 attempts and failing to accomplish anything in the red zone, leading to no TDs on the day.

WR Diontae Johnson was one member of the offense that notably struggled, dropping a couple of passes, and failing to come down with several grabs in contested coverage as he only converted 13 of his targets into five receptions for 60 yards, coming out to a 38% catch percentage.

Johnson voiced his thoughts on the game Monday back in Pittsburgh, stating that the team just needs to keep their composure and weather the storm as they rally around their rookie QB.

“We just have to get that rhythm,” Johnson said to the media Monday in the locker room on video from Steelers.com. “I feel like we are going to be fine. We are going to get that rhythm. Kenny [Pickett] played his behind off. I was talking to him the whole game, making sure he was locked in. Even if he threw a pick, I’m still talking to him trying to keep his head in the game because he’s going to make those mistakes. It’s our job to help him bounce back from those. We just have to keep playing for him, playing for the defense. I feel like we are going to respond in a positive way.”

Pickett’s INT came when targeting Johnson at the end of the first half as Pittsburgh was trying to point points on the board before halftime, under-throwing Johnson, with rookie CB Kaiir Elam waiting to pick off the pass. Outside of the INT, it wasn’t a bad day for Pickett against a vaunted Bills’ defensive front, as he went 34/52 for 327 yards. He showed moments of composure in the pocket, delivering accurate throws under pressure.

While Johnson did admit earlier that this is a “rebuilding year” of sorts for Pittsburgh, he recognizes the importance of playing for Pickett, who is just a rookie getting his first taste of NFL action. That might not result in Pittsburgh making such a turnaround to make the playoffs, but rather get this train going in the right direction down the stretch of the season, giving the team something to go off of for 2023.

That is what the AFC North rival Bengals did Joe Burrow’s rookie year, where the team struggled throughout and hit rock bottom after Burrow tore his ACL near the end of the season, but managed to recoup and add the pieces around their rookie QB to become a winning team and make it to the Super Bowl the following year. Those aspirations are likely out of Pittsburgh’s grasp for next season given the holes on this team, but the blueprint is there to get this ship turned around, and relatively quickly if the players, coaching staff, and front office all do their part to right these wrongs