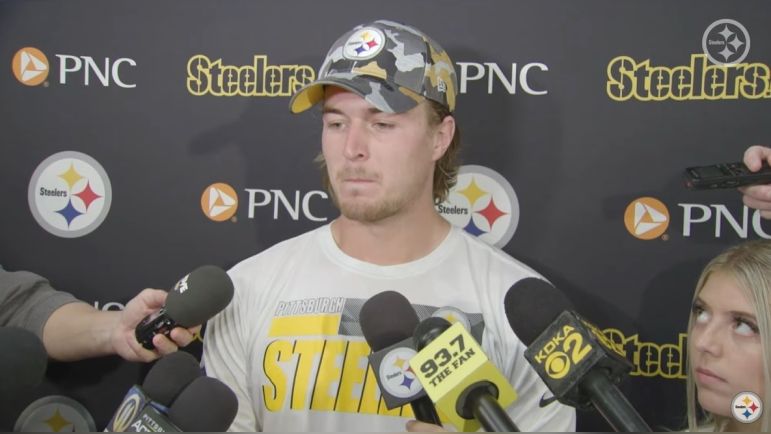 For Week 5, the Pittsburgh Steelers truly have an “us versus the world” mentality. Never in history have they been as big an underdog as they are this weekend, the Buffalo Bills 14-point favorites. Just don’t tell that to Kenny Pickett. He’s having none of it.

“You guys and everyone else think we’re underdogs, but we don’t,” Pickett told reporters today via team transcript. “We’re going to go in there with some confidence.”

Pickett will be making his first NFL start after his debut in Week 4 against the New York Jets. It’s a difficult set of circumstances for a first game but as we wrote about earlier, there’s some history on Pittsburgh’s side. More importantly, there’s belief the Steelers can go out and execute.

“We know how great we can be when we’re detailed and we execute at a high level. That’s something that we need to take care of during the week or we won’t have a shot. So, it’s the details, it’s the little things. Guys run at the right depth, I’ve got to be on time, give a great ball.”

As Pickett acknowledges, there’s little margin for error against a team as talented as the Bills. They come into the game with a top-five offense and defense with an elite QB in Josh Allen, a potent threat at receiver in Stefon Diggs and defensive stars like Von Miller and Micah Hyde along with other studs like LB Matt Milano.

If there is some hope, the Bills are dealing with a laundry list of injuries to notable players like Hyde and WR Gabriel Davis, their top deep threat. Pittsburgh upset Buffalo on the road last year thanks to a second-half comeback, starting with a blocked punt to kickstart the rally. The Steelers will need all of that and more in order to pull off what would be one of the biggest upsets of the past several seasons.

If there’s a way to attack the Bills, it may be through generating pressure. Allen has been sacked five times in his last two games, including four times against the Miami Dolphins, whose aggressive approach has paid off. In last year’s meeting, the Steelers rarely blitzed so it’ll be interesting to see what their gameplan is this time around.

The first part of winning the game is believing you can. And Pickett checks that box.

“I have a ton of confidence in those guys. It’s really everyone doing their part and we’ll be okay.”

After believing it, the next part of winning the game is not losing it. That means taking care of the football, eliminating penalties, having clean defensive communication. If the Steelers can do that, they’ll have a shot, but they’ll have to find ways to create splash on their own in order to win, not just compete.