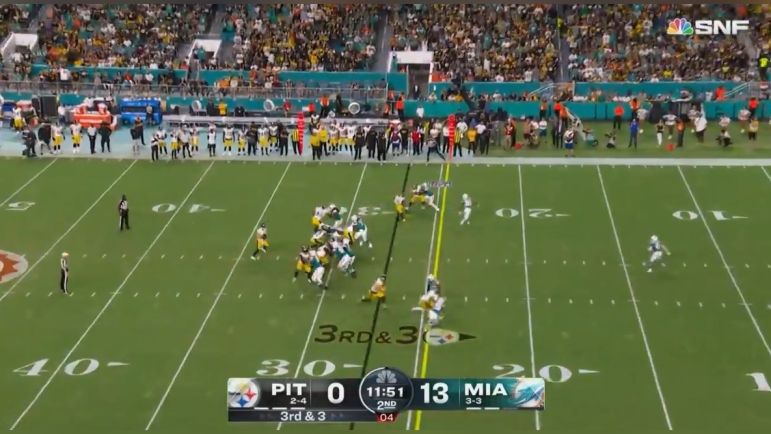 The Pittsburgh Steelers have had a rough time on offense this season, with drives stalling out due to throwing short of the sticks relatively often. This happened a couple of times in last Sunday’s loss to the Miami Dolphins.

Today, in his weekly press conference transcribed by the Steelers, offensive coordinator Matt Canada was asked if it would make more sense to run some routes behind the first down marker, but not too deep. Canada responded, saying that there are receivers running behind the sticks and it is up to the quarterback to hit them.

“I think, again, the coverage dictates that. I can appreciate—I can think about one 2nd-and-4 call  that, again, you go with what your quarterback likes and what we think we can do” Canada said. “I appreciate your point, but I think we’re trying to send guys down the field and then the quarterback makes a decision based on the coverage.”

Canada specifically mentioned two passes to running back Najee Harris where quarterback Kenny Pickett had options past the sticks. However on one of the plays, both George Pickens and Miles Boykin run go routes which are easily defended against. Chase Claypool and Najee Harris run routes short of the sticks, and only tight end Pat Freiermuth runs a route that is past the sticks, but not a go route. You can argue Pickett should hit Freiermuth on this play as he gets open just as Pickett throws it to Harris, but I don’t mind him hitting Harris here. Harris was open and probably gets the first down if not for a great play by the Dolphins’ linebacker.

The biggest issue in the play is by sending both Pickens and Boykin on go routes up the sideline, you’re basically taking them out of the play.

The second play Canada referenced didn’t have two receivers running go routes, but instead had what looks like three curl routes, run by Freiermuth, Pickens, and Boykin. Like the other play referenced, Claypool and Harris run underneath. Harris is wide open on this play, so Pickett dumps it off to him, but is quickly tackled as the Miami defense is protecting the first down marker.

The issue with this play is that the curls are all covered up. You can argue he might be able to hit Boykin, but that is a very tight window. Pickett took the safe option there instead of risking an interception on the Steelers’ side of the 50-yard line.

Based on these two plays, Matt Canada isn’t wrong about receivers running routes past the sticks, but the issue is they just aren’t designed well. Kenny Pickett needs to balance being aggressive while not being careless. Him checking the ball down on these plays was him deciding to not be careless. This Sunday, Canada must dial up plays that get guys open down the field.