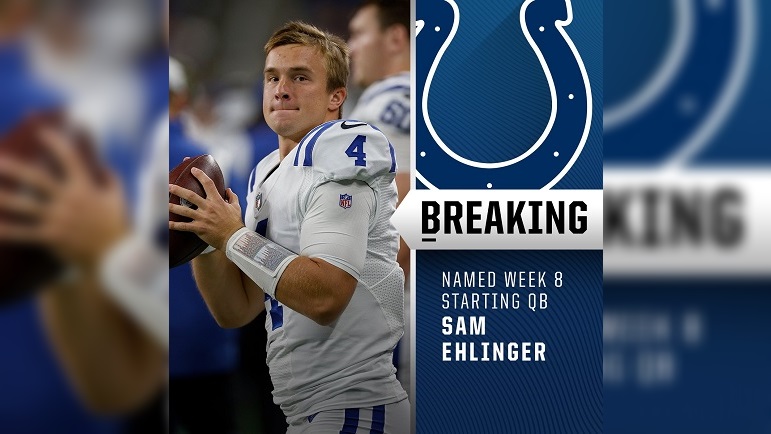 The Pittsburgh Steelers appear to be facing a new starting quarterback here in a few weeks.

ESPN Insider Adam Schefter added further context from Colts HC Frank Reich, stating that the tentative plan is for Ehlinger to start the rest of the 2022 season.

Colts’ HC Frank Reich on his team’s QB change: “Right now the move is for Sam to be the starter for the rest of the season.”

Chappell also mentioned that Ryan has been diagnosed with a Grade 2 sprain (separation) in his right shoulder, suggesting that the move to Ehlinger was going to happen regardless of Ryan’s less than inspiring play so far this season. Ryan has completed 68.4% of his passes for 2008 yards (6.8 YPA), nine TDs and nine INTs in seven games. While the Colts are sitting at 3-3-1, Ryan has struggled in terms of his arm strength and getting the ball to his receivers consistently. He has also struggled with the turnover bug, throwing nine picks and fumbling 11 times (three lost) while also taking a league-high 24 sacks, tied with Joe Burrow for the league lead.

The drop-off in play has been evident from Ryan, who is now dealing with a Grade 2 shoulder separation that will require several weeks to heal. Instead of holding his starting spot upon his return, Reich and the Colts are opting to roll with Ehlinger, a former sixth-round pick in the 2021 NFL Draft out of Texas who appeared in three NFL games last season and has rushed the ball three times for nine yards. He hasn’t attempted a regular season pass.

The Pittsburgh Steelers are scheduled to play the Colts November 28th on Monday Night Football. Both the Colts and the Steelers have been struggling to find an offensive identity this season, with the Colts also struggling with poor offensive line play while dealing with star RB Jonathan Taylor missing time recently due to an ankle injury. In a game that looked to be a pick ’em prior to the move, perhaps the Steelers may catch a break facing Ehlinger over Ryan as he attempts to get his feet wet in his first real NFL action.