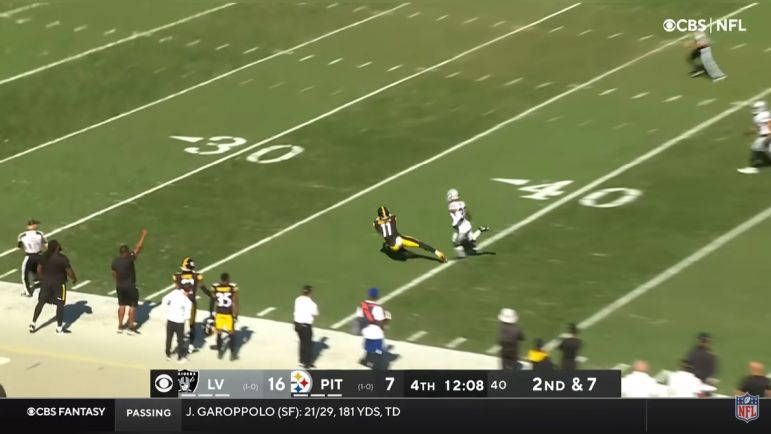 In a stat that may surprise you, over the last two years, no one has been as productive and efficient on go routes than Pittsburgh Steelers’ WR Chase Claypool. That’s according to data compiled by ESPN which broke down the route tree and revealed a long list of information broken down by each route.

In their study of go routes that they define as “a deep throw to a receiver on a straight, vertical release,” they note Claypool has 105 yards on 47 go routes run since 2021. Here’s what Seth Walder notes in his blurb on the most and least efficient go-route runners.

“One target can make a big difference in terms of yards per go route run, even over a year-plus sample. It’s just a matter of whether it was caught. Chase Claypool of the Steelers has 105 receiving yards off go routes since the start of 2021 (47 routes).”

As Walder notes, sample sizes for this type of route are more limited than others, with one catch potentially skewing numbers. But Claypool’s numbers are evidently strong, though the overall blurb here is pretty light on information, not saying if Claypool has the most yards on this route or if he leads in overall yards per route run. The latter seems more likely.

These numbers don’t even include what he did his rookie season. Arguably Claypool’s best season, he has the profile of someone who should win vertically with a rare blend of height and speed. Still, he’s been rightfully criticized for not always playing to that frame and losing out on too many jump ball situations, though keep in mind this stat is only for go routes and wouldn’t include deep crossers like the one he ran on Kenny Pickett’s first interception last weekend.

Doing some quick research, it appears 97 of those 107 yards are centered around two plays last season, a 59-yard catch against the Raiders and 38-yard grab against the Vikings. Perhaps the Vikings one is being counted as a fade and not a go route, ESPN differentiates the two, but the point is 1-2 catches can skew the data.

With sample sizes being small, this data frankly isn’t worth putting much stock into. Perhaps it holds more weight for other routes run more often, slants and curls, but the data here isn’t telling us much. ESPN also labeled TE Pat Freiermuth the least efficient player on “leak” routes at -0.1 yards per route run. I can’t even remember him running a leak route, much less catching one, so ESPN’s numbers are getting bogged down in its own wonkiness.

But it is the data and for a Steelers’ offense looking for a spark, hopefully Claypool can catch a go-route against the Buffalo Bills. His longest reception this year is just 20 yards.