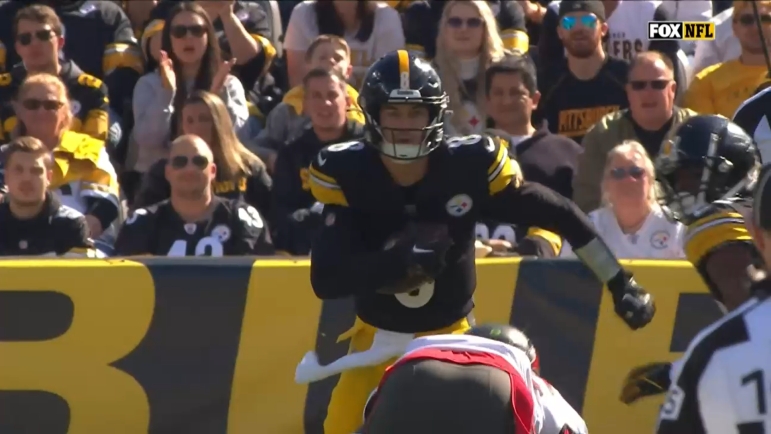 As the Pittsburgh Steelers prepare to face the Miami Dolphins on the road, a team with a high-powered offense who is getting their starting quarterback Tua Tagovailoa back from injury, they cannot afford any offensive woes. This starts with the team’s quarterback play, and arguably also ends there. When asked about how Steelers’ presumed starting quarterback Kenny Pickett’s most recent performance, offensive coordinator Matt Canada insisted that the offensive woes are not limited to him in a Thursday press conference.

“I think Kenny’s continuing to make plays,” Canada said when asked about the pros and cons of Pickett’s performance against the Tampa Bay Buccaneers, according to a transcript provided by the team. “He does a lot of great things. I don’t know if there’re specifics to it. There’s just going to be ebbs and flows in our game as an offense that’s evolving and coming up. I’ve said multiple times, it’s not happening fast enough. I’m not running away from that.”

In the team’s victory against Tampa Bay, the offense was up and down, as was the quarterback play. That is, after an opening drive touchdown with an ideal script, Pickett and the offense did not manage much. The offense’s next five drives resulted in three three-and-outs and two field goals, one of which was due to excellent field position after a Steven Sims kick return that they did not capitalize on.

On the next drive, Pickett was injured and ruled out for the game. Therefore, quarterback Mitch Trubisky, who had started the first four games of the season, came in to replace him. In doing so, he arguably gave the offense a dramatic spark, and ultimately wound up winning the game.

“I think Kenny’s play,” Canada continued. “Everybody’s play–you’re asking about Kenny specifically but that position gets, as we always say, too much credit and too much blame. Obviously, it’s a pivotal position, but it’s not always just Kenny, good or bad.”

While Pickett’s play in the six drives he played left a bit to be desired, Canada is right to point out that it was a collective struggle. The running game did not get much going, and Pickett faced some pressure. As a rookie quarterback, however, learning curves are only natural.

Though it is early and the sample size is limited, there is reason for optimism with Pickett’s play. According to Player Profiler, the rookie ranks first in the NFL in catchable pass rate at 88% and deep ball catchable pass rate at 87.5%, and second place in pressured completion percentage at 54.5%. Pickett’s play thus far has shown promise, and arguably merits his remaining the starter this coming matchup.

In the big picture, the next two games for the Steelers are pivotal, and are both against elite offenses whose likely high point total the Steelers will need to match. If Pickett and the offense can pull off an upset on Sunday against Miami, or the following week against the Philadelphia Eagles, they will enter the bye week with a great deal of confidence. Not to mention, the team may have reigning DPOY T.J. Watt returning from injury, and be in position for a win streak.