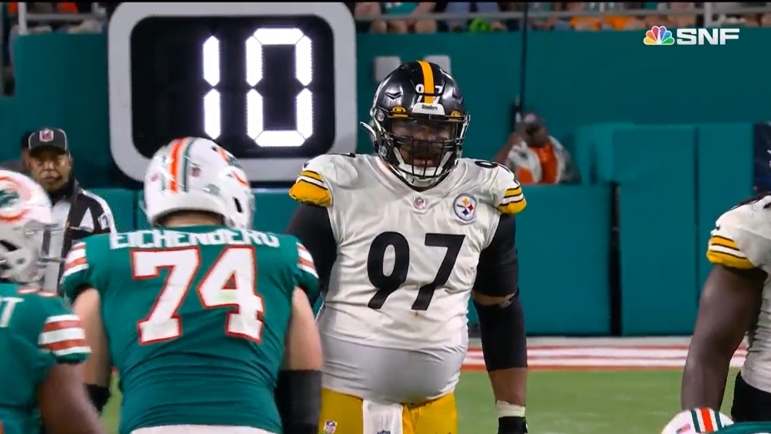 The Pittsburgh Steelers gave themselves chances on Sunday. They had victory within their grasp, but ultimately failed to capitalize on it. And it’s not totally unfair to divide the blame. While the defense did allow 16 points in the first half and really struggled early on, they settled down and held the Miami Dolphins scoreless in the second half.

Unfortunately, the offense was also scoreless in the second half, even though they were in field goal range, at least, multiple times. Twice in the final minutes they were in striking distance of a go-ahead touchdown only to see rookie quarterback Kenny Pickett throw an interception. But the defense at least gave them the chance to come back.

“I was really proud of our defense at the end, because two different times at the end of the game, you gave your offense a chance to go back out there and win the game”, Cameron Heyward said yesterday on his podcast, Not Just Football. “It didn’t work out that way, but even the second-to-last pick, we talked about it. We were like, ‘Let’s just get off the field one more time and let’s see what we can do’”.

“We were able to get off the field, and that’s a lot you can ask from your defense”, he added. “It’s not everything because you could’ve got a turnover, but man, it’s a heck of a way to just, when it gets rough, make a play and get off the field”.

The Dolphins picked up just two first downs on four fourth-quarter possessions—indeed, two on their final six possessions spanning all but the first drive of the third quarter. They went three and out three times, the most critical being the last.

That one came after the Steelers drove down the field for five minutes, from their own 18 to the Dolphins’ 30, recording five first downs, only to see Pickett put the ball in the defense’s hands. Miami took over with 2:57 to play, and thanks to the defense and a couple of timeouts, the Dolphins gave it back with 2:31 to play.

How often do you throw an interception with under three minutes to play and still get the ball back with two and a half minutes to go? Yes, Pickett had to start from his own 13 this time, and to his credit, he was moving the offense down the field, picking up 62 yards by the time the final interception occurred.

The Dolphins scored on four out of five first-half possessions, but were held without a point in the final 30 minutes. They cleaned it up. The offense didn’t capitalize on it this time. But they know that’s the way they have to keep playing moving forward to give themselves a chance.