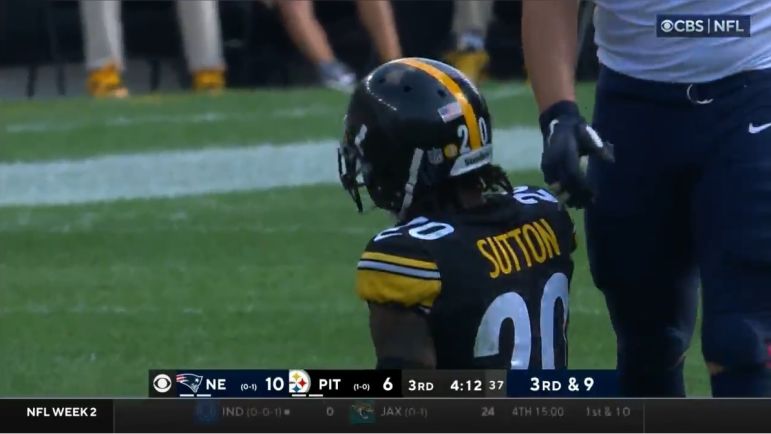 The Pittsburgh Steelers’ banged up secondary will have at least one starter playing this weekend with CB Cam Sutton telling reporters Friday he’ll suit up against the Buffalo Bills. That’s according to the 93.7 The Fan Twitter account, who shared the news a short time ago.

Sutton suffered groin and hamstring injuries in the team’s Week 4 loss to the New York Jets  and had been limited during Wednesday and Thursday’s practice. It’s unclear how much he participated in today’s session. The Steelers will release their final injury report later this afternoon.

Sutton has played well this season, recoding 12 tackles with five pass breakups and two interceptions through his first four games. Sutton has shown excellent hands on both his interceptions, including his pick against the Jets.

I think Chase Claypool needs to take a couple lessons from Cam Sutton about how to high-point the football. Sutton's had a couple of great catches this season. Doesn't catch the ball like a corner. #Steelers pic.twitter.com/LCZnNyMC0C

Sutton will serve as the team’s starting RCB opposite Levi Wallace, expected to again fill in for the injured Ahkello Witherspoon, still dealing with a hamstring injury suffered in Week 3.

Wallace himself has been limited with a foot injury this week but seems on track to play against his former team. Minkah Fitzpatrick suffered a knee injury and has also been limited but is also expected to play. SS Terrell Edmunds is currently the wild card as he works through concussion protocol. After missing Wednesday’s practice, he progressed to work in limited fashion Thursday. Today’s injury report should offer clarity on his status. If he’s unavailable, second-year safety Tre Norwood is expected to fill in. And Sutton expects him to step up.

If 2nd year safety Tre Norwood has to start Sunday, #Steelers Cam Sutton says he's been through a lot of big-time ball and he will help communicate & knows his role

Injuries could again limit the Steelers’ personnel grouping though young players like CBs James Pierre and Josh Jackson saw more practice reps this week, potentially opening the door for either of them to see snaps and make Pittsburgh’s defense more versatile. They’ll need all the help they can get against a strong Bills’ passing attack.