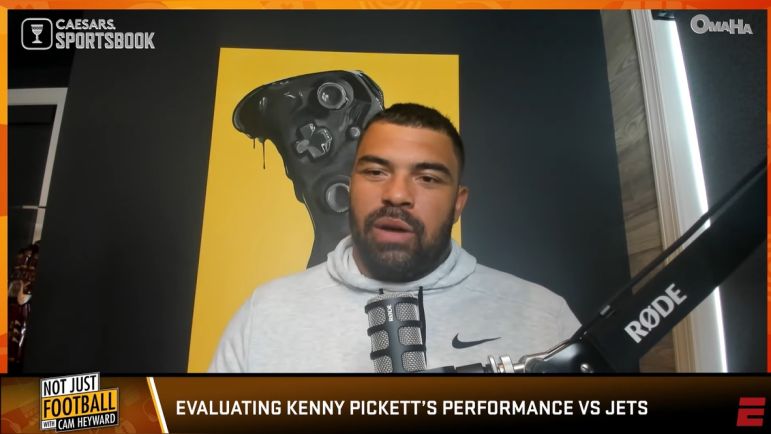 Like the rest of Steelers’ Nation, Cam Heyward watched Kenny Pickett’s debut unfold Sunday at Acrisure Stadium. On his latest episode of Not Just Football With Cam Heyward, Heyward offered his thoughts on how Pickett performed for a first time out.

“There’s good and bad,” Heyward said. “Obviously the quarterback’s gonna take responsibility for the three picks, but I think he did a good job of throwing down the field.”

Throwing three picks probably isn’t how Pickett envisioned his debut but those numbers come without context. The first to Chase Claypool was a bit underthrown but a play Claypool is capable of making and an aggressive and good decision by Pickett. The third was a Hail Mary with Pickett showing off a stronger arm than he displayed in college. The second is arguably the most debatable, a pass that hit Pat Freiermuth in the hands but a play where Pickett drifted too far back, inviting pressure, and making a low-reward throw at a time when Pittsburgh could’ve been chewing clock. As we broke down, Pickett’s quickly finding out tipped passes become interceptions at this level.

Pickett finished the day 10/13 for for 120 yards, zero passing touchdowns, and three interceptions. Over the last decade, he’s just one of two quarterbacks to post such a stat line, a 0/3 with two rushing scores performance. The other was Josh Allen, who did so in 2021. Pickett and the Steelers will face Allen this Sunday for Pickett’s first career start.

Zooming out from just Trubisky vs Pickett, Heyward said the mobility both players offer is something different to see.

“Being able to run, even with Mitch or with Kenny, we’ve been able to run real zone reads. When I was with Ben, there were no zone reads. That’s not a shot at Ben. Ben was just more of a pocket presence…[Trubisky and Pickett] are very athletic and they can make a guy miss in the hole.”

Over his entire career, Roethlisberger never had a multi-touchdown rushing game. Pickett scored his pair off a QB sneak, which became incredibly rare in Roethlisberger’s final years, and off a read-option play Heyward mentioned, one that offered Pickett the ability to hit Pat Freiermuth in the flats. But he was covered, allowing Pickett to dive over the goal line. It’s an added wrinkle to this offense and dimension they haven’t had in about a decade. Pickett also scrambled to pick up third downs when nothing was available downfield and it’ll be an asset to him going forward.

Pickett’s going from the fire into the frying pan for his first start. He’ll be on the road to play the Bills this Sunday as the Steelers open up as historic underdogs. To win, he’ll need to take care of the football, even one turnover could doom this team, while making big-time throws downfield. An upset over Buffalo would make for one heck of a story.