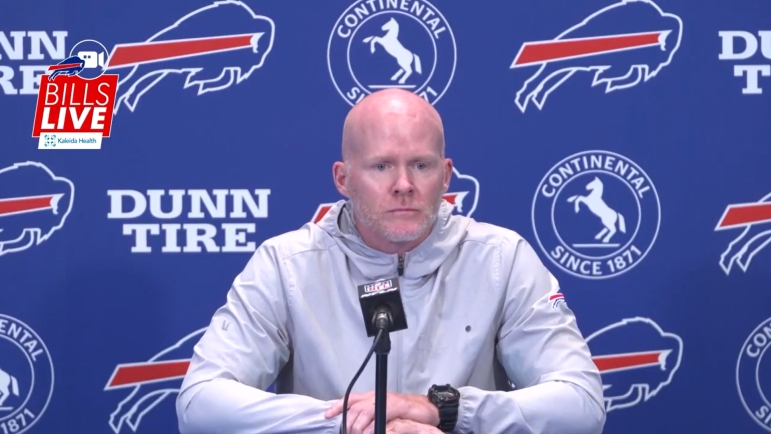 There’s no guessing as to which quarterback the Buffalo Bills will face this weekend. It’ll be Kenny Pickett, a move Mike Tomlin and the Pittsburgh Steelers officially announced Tuesday. Bills’ head coach Sean McDermott spoke to the media on Wednesday and offered his thoughts on facing Pickett.

“Looks like a good young quarterback,” he said Wednesday via the team’s Twitter account. “Had a good preseason. Played well when he got in the game the other day and was productive. He looks like he knows what he’s doing and how to function in that offense and we have a lot of respect for him.”

Pickett was considered the most pro-ready quarterback to come out of the 2022 NFL Draft and is making his first start five games into his rookie season. He relived Mitch Trubisky at halftime against the New York Jets, holding his own and putting up 14 second half points.

For Pickett, a road game against the Bills is about as tough of a way to being a career. Buffalo boasts one of the league’s best and most chaotic defenses, not allowing more than 21 points in any game this season while ranked third in the NFL in takeaways (nine) and fifth in the league in sacks (13). But every rookie quarterback will face adversity. Avoiding or trying to hide it is impossible.

If the Steelers to want to pull off the upset, the run game will have to continue to make the strides that it has. Slowly but surely, things have gotten better each week with Najee Harris’ yards per carry bumping up week by week. Here’s how it’s tracked.

Pickett and the passing game will have to match the Bills’ potent offensive attack with splash plays. So far, the Steelers don’t have a play from scrimmage longer than 36 yards and none of their wide receivers have caught a touchdown pass. The offensive line will have to block up Von Miller, still a serious threat with three sacks in his age-33 season, while Pittsburgh’s defense will have to find ways to hold the Bills’ offense in check. They’ll allow yards but getting red zone stops will be key.

Of course, the most important aspects involve turnovers. None on offense, some on defense. Being even in the turnover battle almost certainly won’t be good enough to knock off the Bills. Being +2 is probably the minimum needed for Pittsburgh to have a chance. Unfortunately, that’s only happened to the Steelers once this season and that came in Week One with T.J. Watt on the field.