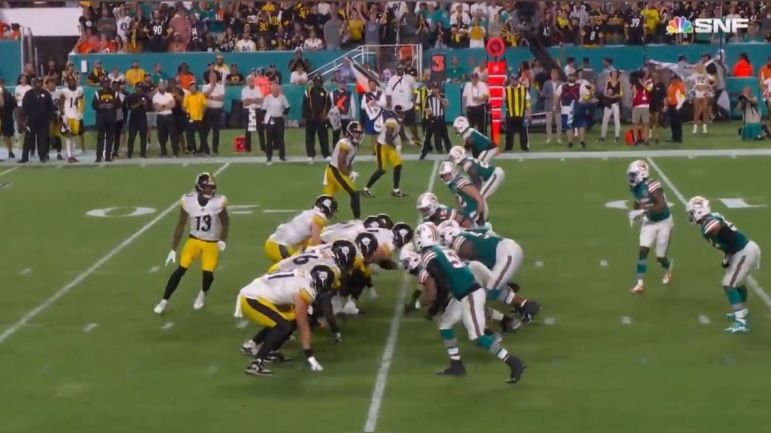 3rd and 1 to 3rd and 16. Story of the Pittsburgh Steelers’ offense. One step forward, too many steps backward. Driving for a potential game-winning touchdown, Kenny Pickett and the Steelers faced third and a yard late in the fourth quarter. Following the lead of several teams around the league, WR Miles Boykin went in motion and served as the “pusher” to get Pickett over the sticks. Pickett seemed to convert but a pre-snap penalty for illegal shift brought the play back, wiping the conversion out and putting the team in 3rd and 6. A holding penalty made that 3rd and 16 and led to a Pickett interception, one of many failed drives in that game.

Speaking with reporters about the play Thursday, Matt Canada said it was a hard lesson to learn.

“We’ve got to make sure that we don’t get outside of our area and forget some of those fundamental things,” he said via a team transcript. “How many times has Kenny Pickett sent a guy in motion on a play in his life? A whole bunch. But that time, we weren’t quite set.”

The right side of the line wasn’t set as Boykin went in motion, leading to the flag. Take a look at the play.

It’s one of many negative plays the Steelers had in this game that proved costly in their loss to the Dolphins and a central reason why the team managed to put up just ten points. Another hard lesson to learn for this offense in a year full of them, and one of many Pickett would like to have back. But Canada believes it’s not a mistake Pickett will make twice.

“I feel real strong it’ll never happen again. Kenny’s here for the next 15 years, I bet that never happens again. That’s a crappy lesson we’ve got to deal with, but it’s life.”

That’s the goal for the rest of the season. Like any rookie quarterback, Pickett has gone through ups and downs. The best and most important thing he can do is avoid making the same mistake again and again. How he progresses from how he’s started the year to where he ends up will be the biggest measuring stick going forward. Of course, sports are a results-oriented business, too, and Pickett needs to cut down on his interceptions while putting more points on the board.