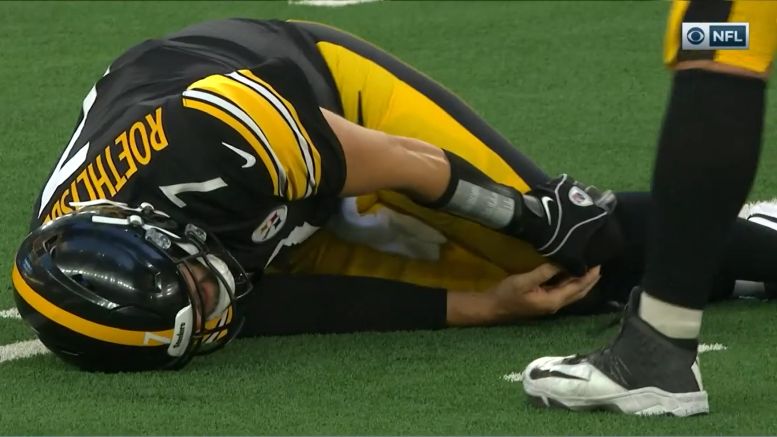 On Episode 10 of his Footbahlin’ podcast, former Pittsburgh Steelers quarterback Ben Roethlisberger detailed the most painful injuries he ever had to play through in his career. He said that a broken nose suffered against the Baltimore Ravens on a hit by defensive lineman Haloti Ngata was one of the worst.

“Haloti Ngata’s hand came right through here and busted my nose. I remember it was like second down and he busted my nose, I had blood coming down, it hurts but it’s not excruciating. But I’m like, gosh it kind of hurts,” Roethlisberger said. “I come off the field and I was like ‘doc, is my nose broke?” He said that Dr. James Bradley, the Steelers’ team doctor, said they’d look at it at halftime.

“So we go into halftime and I go to the mirror and my nose was plastered to my cheek. Like I could smell around a corner. I’m like ‘Doc, really, you’re not sure?’ He goes, ‘well, I didn’t want to freak you out there,’” he added.

Roethlisberger said they cracked the nose back into place and he came out for the second half. The injury happened in 2010. Despite the broken nose, Roethlisberger led Pittsburgh to a win that ended up being the deciding factor at the top of the AFC North standings, as it gave the Steelers the tiebreaker against Baltimore, and both teams ended up finishing with identical 12-4 records.

Other injuries Roethlisberger mentioned were a torn meniscus he suffered during his second year in the league and a broken thumb he suffered the same year that he said made it feel as if the ball was flat and led to him wearing gloves. He also mentioned his elbow injury that ended his season in 2019 and said he didn’t realize the severity of it and thought he could play through it. He said when the team doctor told him he tore the ligaments off the bone, Roethlisberger replied “You don’t know that doc.”

Obviously, he did know that, as that injury eventually ended his season after he played through it for a half. Throughout his career, Roethlisberger racked up a laundry list of injuries, and pictures of him with various wraps, ice and casts around his body became memes around the internet. Despite that, he was still able to play 249 games and lead the Steelers to two Super Bowl victories and three appearances, and will end his career in Canton, Ohio as a Pro Football Hall of Famer.