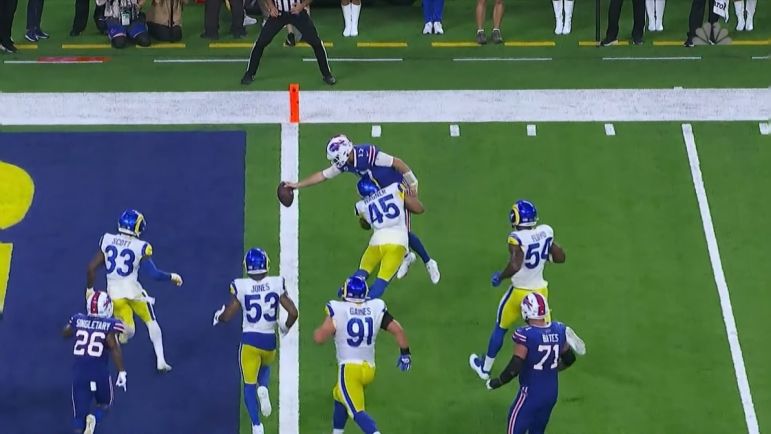 The opening kickoff game this season featured the defending-champion Rams and the upstart Buffalo Bills, led by their perennial MVP candidate, quarterback Josh Allen. In this game, if football fans tuning in weren’t already aware of Allen’s rushing prowess, they were put on notice, as his stiff arm on safety Nick Scott was buzzing on Sportscenter, as he also outmuscled several other defenders on the evening.

Earlier today, Defensive Coordinator Teryl Austin was asked exactly how his defense, while missing far and away their best player in DPOY T.J. Watt, the unit can hope to contain, or at least minimize the damage by Allen. His answer was simple but humorous in nature, and that’s to sneak a few extra defenders onto the field.

“He’s one of those unique quarterbacks that has the ability to run, to throw, to extend plays,” Austin said via an official team transcript. “There’s going to be some plays where he escapes and he gets out, and we’ve just got to make sure when those plays happen, they don’t become catastrophic for us.”

One thing that the defense will need to do is make sure that whenever Allen does run, when they get home, they deliver a message to him, and don’t end up on the receiving end of some of the punishment that he’s known to deliver. Last season, former DC Keith Butler echoed similar sentiments as the team approached their game at Buffalo, where they were again playing the underdog role. He more or less said that if Allen wants to finish runs like a running back, then he can expect to receive some of the punishing hits that running backs take. The team minimized Allen’s damage on the ground in that game, and the Steelers upset Buffalo 23-16.

Austin believes a similar approach this year will help the team at least keep pace with Buffalo, and even though they’re missing their defensive centerpiece in Watt, whenever one of his defenders makes contact with Allen, they need to make him think twice about doing it again.

“I think when he leaves the pocket, you have to go ‘Hey, alright, we’ve got a big guy coming, almost like a tight end or a big receiver, and we have to go tackle him, we’ve got to get him on the ground.’ You treat him like a runner, like you would treat any runner, and you go to tackle him because he’s not going to slide.”

Over the first few weeks of the season, the Steelers have faced the likes of Joe Burrow, Mac Jones, Jacoby Brissett and Zach Wilson, but Allen is a totally different breed than any of them and offers a blend of size, speed and power at the position that is unmatched.