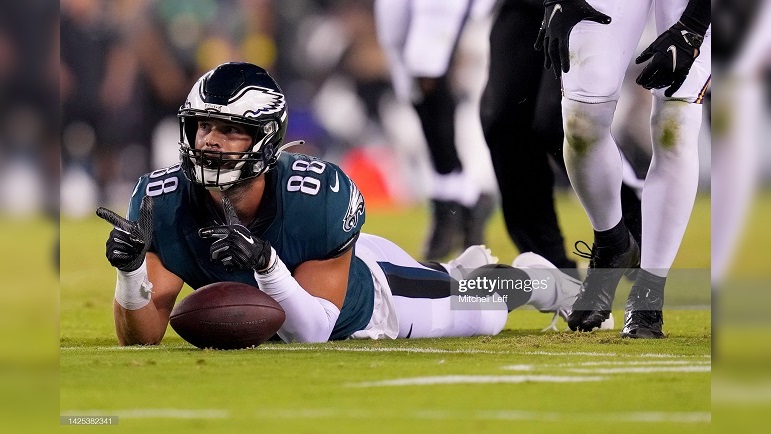 Did you listen to the Mike Tomlin press conference on Tuesday? As usual, the Pittsburgh Steelers head coach ran down the team’s next opponent during his opening presser remarks and this week that applies to the undefeated Philadelphia Eagles. As usual, Tomlin did his best to really hype the team’s next opponent. This week’s hype, however, included Tomlin praising the Eagles’ tight end group.

“They’ve got really good tight ends; they utilize them well to supplement their run and misdirection-passing game and in interior verticals,” Tomlin said. “Man, their tight ends are awesome.”

Awesome? Really? Well, that piqued my interest so I instantly started researching why Tomlin would say that about that the Eagles group of tight ends. What I found was quite interesting.

To start with, the Eagles’ group of tight ends, Dallas Goedert, Jack Stoll, and Grant Calcaterra, have combined to catch 29 passes for 422 with a touchdown. That’s nearly 28% of all receiving yardage that Eagles have on the season and Goedert has the biggest chunk of it with 357 yards, which is good for third-most on the team. By the way, of those 422 receiving yards produced by those the Eagles’ tight ends, 335 of them have come after the catch. That’s an average of 11.6 yards gained after the catch. Yeah, that’s awesome.

The next thing that stuck out to me when researching the Eagles’ offense, and specifically their tight ends, is the explosive plays they have produced. In total, the Eagles’ offense has just 22 explosive plays of 20 yards or longer on the season. Within that, however, is the fact that their tight ends have produced eight of those with Goedert leading the way with six. An Eagles’ tight end has produced at least one explosive play in each of the team’s first six games as well.

While Calcaterra only has one reception for 40 yards entering Week 8, he’s quite a blocker. In fact, Calcaterra enters Week 8 with the second highest PFF blocking grade of all tight ends in the league. He’s only logged 45 offensive snaps to date, mind you, but when he is on the field, 31 of those times the Eagles ran the football. Goedert, by the way, is not a bad blocker out in space and that’s evidenced in the video above.

So, how has the Steelers’ defense done against opposing tight ends so far this season? Quite honestly, not bad overall. In their first seven games, the Steelers’ defense has allowed opposing tight ends to catch 28 passes for 292 yards and a touchdown. However, nine of those catches, 89 of those yards and the one touchdown came via Cleveland Browns tight end David Njoku back in Week 3.

In closing, Goedert is sure to be targeted some on Sunday when the Eagles play the Steelers and he’s sure to have a few catches. Getting Goedert to the ground quickly on Sunday might be the biggest chore the Steelers’ defense faces in that contest. If the unit can achieve that goal, and in the process, not allow Goedert to register any explosive plays on Sunday, it will go a long way in diminishing the awesomeness of the Eagles tight end position group.