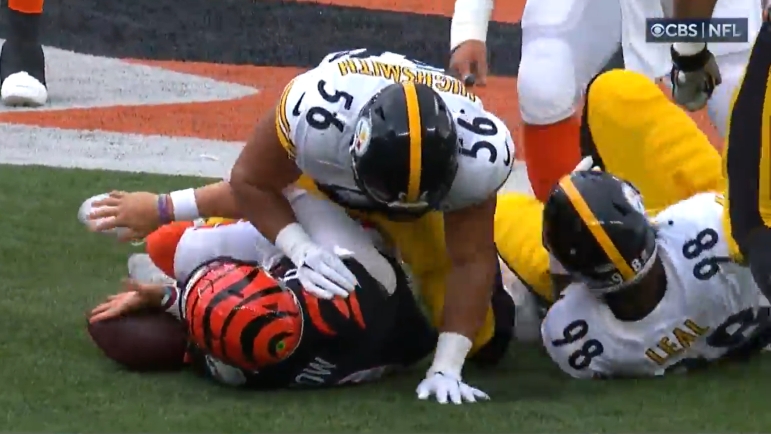 Pittsburgh Steelers third-year outside linebacker Alex Highsmith lost the current NFL lead in sacks on the season this past week after being blanked in that category against the Miami Dolphins. New England Patriots edge rusher and former Baltimore Raven Matt Judon is coming off of a 2.5-sack game, giving him eight on the season. Micah Parsons is also up to eight and Nick Bosa is at seven on the year, both ahead of his total.

But he is already above where he was last season, finishing his first full year as a starter with six sacks. Still, his efforts are to be commended. In fact, if you go back to last season, including the playoffs, he has 10.5 sacks in his past 11 games, which accounts for all but five that he has in his career up to this point in 40 games played.

“I try not to worry about it”, he told reporters from the locker room yesterday when he was asked about being among the league leaders in sacks, via the team’s website. “The only thing that really matters to me is wins and stuff. I just want to continue to go out there and be my best self and put the team in the best position to win”.

The Steelers, as you know, have been desperate for a pass rush minus T.J. Watt, the reigning Defensive Player of the Year, and Highsmith has been the only one producing on any kind of consistent basis. The team has only five sacks in the past six games after recording seven in the opener before Watt was injured. Three and a half of those sacks are from Highsmith, splitting one with Larry Ogunjobi, and the other belonging to Cameron Heyward.

The good news is that reinforcements are finally on the way as Watt formally began practicing yesterday. That means technically that he can be activated at any time within the next 20 days. He could theoretically suit up and play on Sunday in Philadelphia against the Eagles.

More realistically, however, head coach Mike Tomlin and the training staff plan to hold him out until after the game. The Steelers have a bye coming up after the Eagles game. That will buy Watt plenty of time to get his football legs back under him, to test out his knee without pushing it and make sure he’s as healthy as he can be for the final nine games.

Getting Watt back doesn’t simply add one of the best players in the NFL. His presence on the field also makes everybody else’s job easier. While Highsmith has on the whole done a commendable job trying to hold down the fort virtually on his own, having such star power drawing attention away from him will do wonders for his own game.