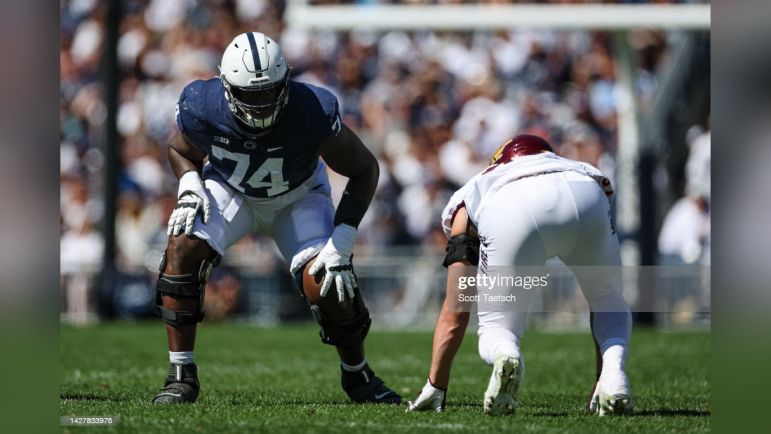 With the Pittsburgh Steelers sitting at 2-5 and on the brink of their season being over before Halloween, it doesn’t feel early to look at 2023 NFL mock drafts. Odds are, you’ll be hearing about them a lot more over the next couple of months. CBS’ Chris Trapasso revealed his latest projection Wednesday morning. With the Steelers picking #5 overall, he has them taking Penn State offensive linemen Olumuyiwa Fashanu to bolster the team’s front five. Briefly explaining the pick, Trapasso writes:

“Fashanu is a stellar pass blocker who would be a welcomed addition to Year 2 of the Kenny Pickett era.”

Fashanu is a bit of a projection. After starting just one game in 2021, he became the team’s starting left tackle this season to replace the graduated Rasheed Walker. According to his Penn State bio, he’s already been twice named the coaching staff’s Offensive Player of the Game. A four-star recruit coming out of high school, he chose the Nittany Lions over a slew of offers including ones from Alabama, Florida, Michigan, and Oregon.

Our Jonathan Heitritter recently spotlighted Fashanu in a Scouting Notebook preview earlier this month, offering this overview of his game:

“He has the size and length you look for at the blindside position on the offensive line and has the athleticism and footwork to mirror pass rushers in pass protection. He sets the depth of the pocket well and has quick feet to cut rushers off their path. A solid run blocker as well, Fashanu could vault himself near the top of the OT ranking should he decide to declare early after the season.”

As he notes, Fashanu is an underclassman but as a redshirt sophomore, he’s eligible to declare after this season. Whether or not he chooses to after just one season as a starter is anyone’s guess.

Dan Moore Jr. has improved as the Steelers’ current left tackle, though his ceiling doesn’t seem to be one of an elite-level, top-five blindside protector. Pittsburgh’s offensive line hasn’t played as poorly as expected this season, though their run blocking has failed to find consistency. If there’s any area of the line the Steelers will likely look to make upgrades to, it’s the left side of the line at guard or tackle. Replacing Kevin Dotson at LG might be at the top of their list while center Mason Cole, though serviceable, isn’t a long-term option in the middle. But taking a guard or center as high as Pittsburgh’s likely to pick probably isn’t going to happen.

The fact the Steelers could be picking in the top five is historical enough. In the Kevin Colbert era, Pittsburgh never had higher than the eighth overall pick, taking WR Plaxico Burress in Colbert’s first draft class. Having the fifth pick would be the team’s highest selection since 1970 when they took Terry Bradshaw #1 overall in Chuck Noll’s second year on the job. Other top ten picks they’ve had since include WR Frank Lewis in 1971, OG John Rienstra in 1986, RB Tim Worley in 1989, and LB Devin Bush in 2019, though Pittsburgh traded up to take the latter.