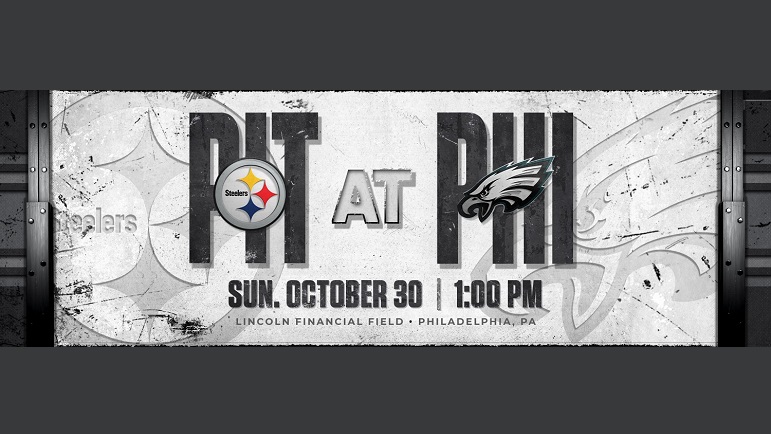 The Pittsburgh Steelers trail the Philadelphia Eagles 21-10 entering the second half. A big defensive drive to start out the 2nd half for the Steelers. If they want any chance at keeping this competitive, a defensive stand or turnover would go a long way.

Kenny Pickett has played okay – not great, but has avoided costly turnovers. Penalties have been the defining characteristic of this game, especially on offense.

Kenny Pickett is the Steelers leading rusher at the half with 29 yards. The rest of the team has 22 yards combined.

According to ESPN, that Steelers FG dropped the Eagles win probability from 95.1% all the way down to 93%. Lol.

START OF 2ND HALF.

Connor Heyward tackled the kickoff at the 25 yard line.

Mike Tomlin tells @tracywolfson the Steelers offense will be "fine" if they cut down on penalties.

1st and 10, James Pierre in the game instead of Ahkello Witherspoon. Pierre defended the go route on the first play of the half. 2nd and 10, Miles Sanders ripped off 21 yards off right tackle. Minkah Fitzpatrick had to make the tackle to save the touchdown.

1st and 10, DeVonta Smith caught the pass for another 10. James Pierre getting targeted early and often in this half.

On 1st, Sanders picked up 10 yards bouncing outside, tackled by Myles Jack and Minkah Fitzpatrick.

Three straight plays to pick up 1st downs. Marching down the field. Zach Pascal caught a 34 yard touchdown. Nobody even in his zip code in coverage. Minkah tried to knock him out of bounds before scoring, but wasn’t able. 28-10 Eagles.

With this offense, an 18 point deficit is insurmountable.

Touchback gives Kenny Pickett and the offense the ball at the 25. On 1st, an 8 yard pass to Pat Freiermuth. Targeted Freiermuth on 2nd and 2, but incomplete. On 3rd and 2, deep pass to Diontae Johnson also incomplete.

Direct snap to Benny Snell on the punt, he rushed for 4 to convert.

On 1st and 10, Chuks Okorafor called for offensive holding. 1st and 20, Pickett complete to Claypool who turned upfield for 25 yards. Great effort to finish that play by Claypool.

Claypool holding his hand on the sideline.

On 1st and 10, Pickett complete to Diontae Johnson for 5 yards. Najee Harris up the middle on 2nd for 2 yards. That might be his longest run of the game. On 3rd and 3, Pickett checked down to Najee Harris. Harris did too much dancing before driving upfield and got no gain. Could have maybe picked it up if he lowered his shoulder. 4th and 3, Pickett passed to Najee again who gained 9 yards this time.

On 1st and 10, Pickett complete to Chase Claypool for 5 yards. Glad he is back on the field after holding his hand seemingly in pain. 2nd and 5, Jaylen Warren gained 10 yards. His second 10 yard play of the game.

1st and 10, deep incompletion to Diontae Johnson. Long ball hasn’t been good enough today, on a day where that is the defining trait of the opposition. 2nd and 10, back to Diontae underneath to gain 6 yards. 3rd and 4, incomplete intended for Chase Claypool. On the 11 yard line, you can’t really settle for a field goal here. The Steelers do settle for the field goal. Field goal is good. 28-13 Eagles.

That decision might be criticized, but it does keep it a two possession game with 5:55 left in the 3rd quarter. Coming up empty after a long drive would have been crushing.

The Chris Boswell injury produced its first big negative. Nick Sciba’s kickoff went out of bounds around the 20, not even close. Eagles get the ball at the 40. That is a killer.

On 1st and 10, Sanders gained 6 yards. Incomplete pass on 2nd and 4, AJ Brown dropped the pass. Tomlin wanted an offensive pass interference call. Steelers have been getting called for everything, so I understand the frustration. 3rd and 4, Goedert picked up a 1st down.

On 1st, illegal formation wiped out a 7 yard completion. 1st and 15, Sanders off right tackle for 6 yards.  Deep incompletion on 2nd, but holding backs them up further. 2nd and 19, Cameron Heyward sacked Hurts for a loss of 5. 3rd and 24, they gain 14 with Sanders on the ground, but should be lining up for a punt.

The punt was not fielded by Gunner Olszewski and was downed at the 1 yard line. The Steelers are playing this game on All-Madden difficulty today.

This about as uncomfortable of a situation you can put a rookie quarterback in. Time to see how Pickett responds.

On 1st, Najee Harris gained 3 yards; his longest run of the day. 2nd and 7, Pickett complete to Johnson for 6. Just shy of the 1st. 3rd and 1, incomplete pass, but defensive pass interference called by Bradberry. Bails the Steelers out of their bad field position.

On 1st and 10, Najee up the middle for 18 yards. Don’t know for sure, but that has to be among his longest of the season.

The 1st down pass was deflected at the line of scrimmage. On 2nd, Pickett complete to Freiermuth who ran out of bounds for 10 yards.

1st and 10 in Eagles’ territory after the break.

On 1st, Jaylen Warren gained 1 yard up the middle. Steven Sims end around for 11.

Steelers OL with their worst game of the year, by far. Not surprising, considering front they’re facing, but very discouraging.

I know @Alex_Kozora has reported on it well in the past, Pickett often is far too loose with the ball while navigating the pockets. Was the reason for a majority of his fumbles at Pitt, causes his first lost fumble in the NFL there. #Steelers

The first play, a 43 yard catch-and-run for AJ Brown. He was stopped short of his fourth touchdown, but the damage was done. Next play, 11 yard touchdown by Miles Sanders. 35-13 Eagles.

Pickett kept the ball and ran for the first to cross the 50 yard line.

Not the first time this season, the Steelers are having backup quarterbacks put in to close out games.

The defense shuts down Minshew’s first drive and forced the punt. On 1st and 10, Pickett complete to Jaylen Warren for 15 yards.

Pickett up to six sacks. https://t.co/s3k8EpUrIT

Warren three yards on 1st. 2nd and 7, Warren checkdown for no gain. On 3rd, Pickett tossed it deep intended for Pat Freiermuth in the middle of the field, intercepted by Gardner-Johnson in the endzone.

Here is the INT #Steelers pic.twitter.com/e0ojCuYDjA

Up to 8 interceptions and now 1 lost fumble for Pickett in 4 full games worth.

James Pierre injured on 1st and 10 run for Boston Scott. He came in off the bench to relieve the struggling Ahkello Witherspoon. Levi Wallace being out had a large effect on this game.

Team heading into the bye. If they're going to make a change in OC, tomorrow will be the day they do it. #Steelers

The Pittsburgh Steelers officially have the 32nd ranked scoring offense in football. They fall behind the Denver Broncos today.

The Steelers are averaging 15 PPG. #Steelers

Since the NFL moved to a 16-game schedule, only one team in history has started a year 2-6 and made the playoffs – the 2020 Washington Football Team, who won the NFC East at 7-9.

Wrote after Week 4 Pittsburgh's season was over. Today, you can officially assume it is. #Steelers