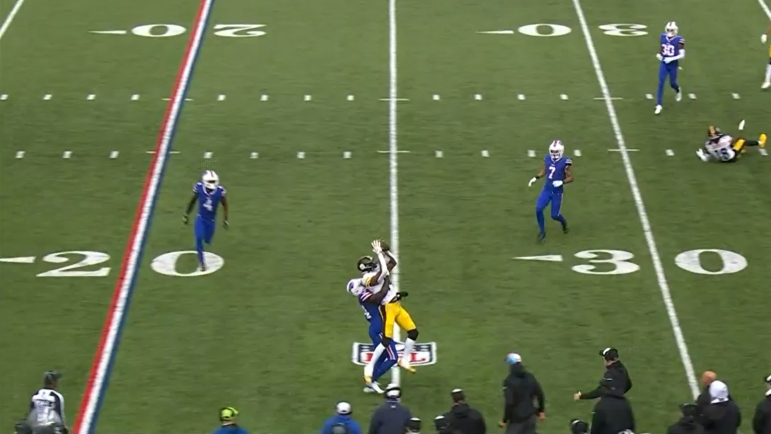 Reasoning: The second-round pick has been picking up steam over the course of the last 90 minutes of football he has played, which happens to coincide with the playing time of first-round quarterback Kenny Pickett. He has caught 10 passes since then for 154 yards.

Let’s kick this off by comparing numbers. I’m not going to put them on equal footing because there are too many variables involved, so this isn’t just a narrative about Mitch Trubisky versus Kenny Pickett. But it is what the timeline is.

George Pickens caught seven passes on 16 targets through the first 3.5 games of the season, for 96 yards, and three first downs, all of that coming with Trubisky at quarterback. Since then, he has caught 10 of 12 passes for 154 yards with nine first downs in the past 1.5 games, all with Pickett at quarterback.

Pickett had the benefit, of course, of playing with Pickens after he had gotten a handful of games under his belt, got a feel for being on an NFL field, and began to expand and grow his route tree. He’s already shown internal growth in his own game over the course of the first five weeks, so that skews in the current starter’s favor.

Regardless of the hows and the whys, however, the overarching point is that we’re starting to see George Pickens as the incredible talent that most of us thought that he was when the Steelers drafted him in the second round. We’re also seeing some of the minor negatives on the scouting report, and perhaps he’ll grow out of them, but boy, can he catch a football.

The rookie has caught six of eight passes in each of his past two games, putting up 102 yards last week and 83 yards this week, averaging 15.4 yards per reception during that time. On the season, he now has 17 catches for 250 yards (just 17 behind Diontae Johnson for the team lead).

There isn’t a lot for Steelers fans to be excited about right now, but some of these rookies are performing and showing progress. Not that we haven’t been down this road in the past with earlier rookies who came out swinging but ended up looking like slap-fighters, but at least the early signs we’re seeing from Pickett and Pickens (and DeMarvin Leal for that matter) are something to hang your hat on.