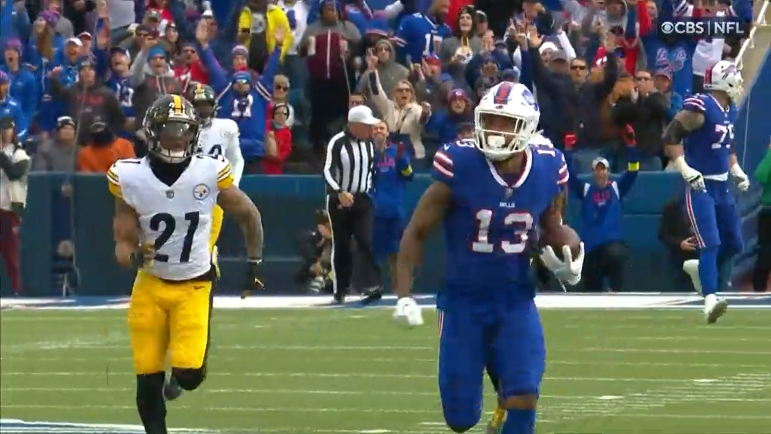 Reasoning: The only defender to play every snap on Sunday, Tre Norwood did not step up to the challenge when given the opportunity to start a game in Terrell Edmunds’ absence while the veteran was in the concussion protocol, arguably the worst defender on the field.

There are times through Tre Norwood’s young career in which he has looked great playing in a limited role, typically as the dime defender in sub-packages. The has started two games now, however, due to injuries, and he has not looked good at all in that wider net of responsibility.

That’s not to say that he’s not capable of playing more or in specific roles. It’s just that the current body of evidence that not favor that opinion. And Sunday’s game against the Buffalo Bills was probably the worst game of his career so far, starting with a poor showing on the 98-yard touchdown that was the third play of the game.

Although that particular target wasn’t charged to him (cornerback Levi Wallace was the primary coverage man against his former team), it was just sort of indicative of how the day went. Both for Norwood and for the defense as a whole. Even Minkah Fitzpatrick gave up a long touchdown as he tried to wrestle the ball away from the same receiver who bested Wallace and Norwood.

On top of that, and other lapses in coverage, Norwood’s tackling was not sound. I noted him missing at least two tackles, although he was unfortunately not the team’s worst defender in that regard. But it was just one of ‘those’ days. Perhaps the only defender who had a genuinely good game was Cameron Heyward. Nobody else really did anything worth commending.

One hopes that Terrell Edmunds, who missed the game after suffering a concussion last week, will be ready to get back on the field in time for Sunday’s game back home against Tom Brady and the Tampa Bay Buccaneers. At least that would put Norwood back into a more familiar and comfortable sub-package role.