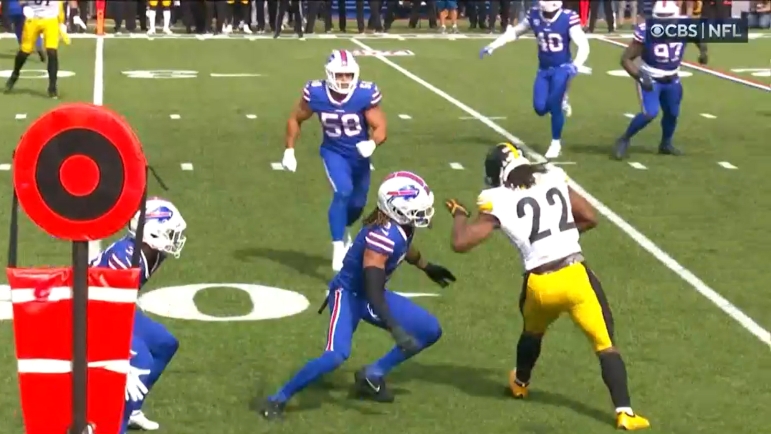 Reasoning: The second-year running back will be playing unencumbered for the first time all season today, or so he told reporters on Friday. He had been playing with a steel plate in the shoe of his injured foot all season up until this past week of practice, but he told reporters that that is gone and he is at 100 percent now.

We learned a bit of interesting news Friday about Pittsburgh Steelers running back Najee Harris, the second-year man who has generally gotten out to a rather unremarkable start to the season. Having suffered a Lisfranc foot injury early in training camp, he told reporters that he had been playing with a steel plate in his shoe—up until earlier this week, when he finally removed it.

While he did tell reporters that the steel plate was not affecting his ability to get some burst in his step, he acknowledged that there were some limitations in his short-area mobility. Maybe there is a minor difference or no difference at all, but at least he’s no longer playing literally weighted down.

The thing is, Harris himself probably doesn’t fully grasp what how this might have affected him. His injury occurred early in padded practices. He never played even in a preseason game without the plate, hardly even practiced in pads without it. So we basically haven’t seen what he should look like in his second season up to this point.

At least that’s what we get to tell ourselves until kickoff. The hope is of course that he shows much better than he has all season up to this point, which has been questionable enough for people to seriously weigh whether or not rookie college free agent Jaylen Warren shouldn’t be the starter right now.

Most players make a sizeable jump from year one to year two, especially from a “pedestrian” rookie year, but it’s hard to show that when you’re playing through injury and/or with restrictive protective accouterments, as Harris has through the Steelers’ first five games. Maybe, just maybe, we start to see the ‘real’ Najee this week and moving forward. Or maybe we’ve been seeing him all along.