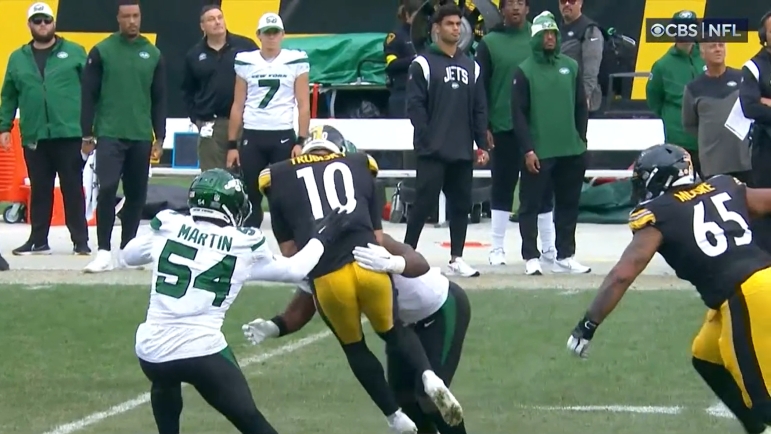 Reasoning: The sixth-year veteran was benched at halftime during Sunday’s game after three and a half games of struggling to move the ball on offense. Head coach Mike Tomlin confirmed on Tuesday that Trubisky is now second on the depth chart from now on, behind rookie Kenny Pickett.

We all knew the day would come. We all knew it would be sometime this year, most likely. It was just a matter of when. Mike Tomlin certainly seemed to have his thumb on the scales during the summer’s quarterback ‘competition’ in favor of Captain Trubisky, but now his most significant responsibility on Sundays will be perhaps calling heads or tails—or watching Cameron Heyward call it.

That’s because he’s still one of the Steelers’ five captains for the 2022 season, but he’s now a backup, which is not exactly the most common circumstance that you’re going to find. His teammates presumably believed in him in August and September and voted him to be captain, but whether they believe in him now or not, it’s not his job anymore.

It’s Kenny Pickett’s, and the offense in one half of play already looked better, more alive, and more energetic with him in it. And that was him coming off the bench cold at halftime, having gotten in minimal work during practices with the starters.

Head coach Mike Tomlin suggested that, because of his familiarity with the Buffalo Bills, the team’s next opponent, he considered going back to Trubisky. It was a question that he was asked specifically. I’m going to guess that that consideration lasted about 10 seconds at most.

He didn’t decide to pull Trubisky for Pickett at halftime on Sunday just because he wanted to try to get a ‘spark’ in the second half against the New York Jets. When he made that move, he knew that he was making a move that he might not make again for the remainder of his coaching career.

Ideally, it will be the last decision he ever makes about a quarterback, because it would mean that Pickett is the Steelers’ starter for the next 15-plus years, and, well, I’m guessing he’ll be retired by then. And Trubisky, if we’re being honest, will either be long out of the league by then or finishing up a career of collecting paychecks as a backup. The odds of him ever winning a quarterback competition again are slim to none, and if he does, it will be on a team that is going to have a losing record.