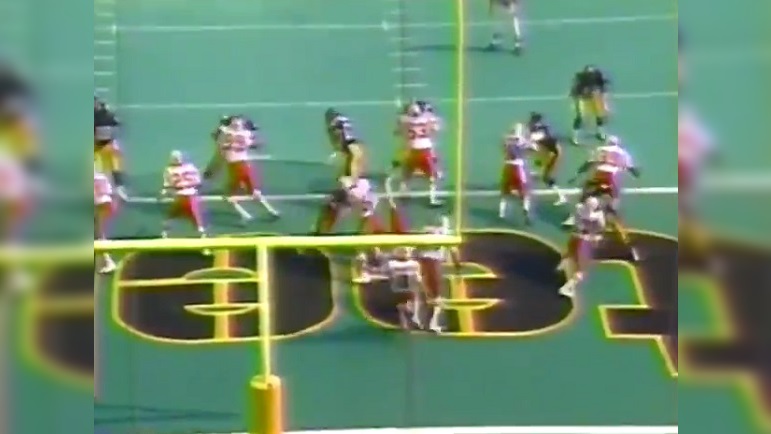 Remember the butt punt a few weeks ago in the game between the Miami Dolphins and the Buffalo Bills? That entertaining play was obviously of the rare variety, especially in the NFL. However, as rare as that Thomas Morstead butt punt into Trent Sherfield was in Week 3, it’s not like it was the first time it’s happened in the NFL. In fact, the Pittsburgh Steelers once had a butt punt happen in one of their home games many moons ago, and thankfully it wasn’t them that took that one in that contest.

That butt punt never left the end zone as it bounced right into the hands of then-rookie Steelers wide receiver Ernie Mills for a touchdown. I guess you could say that Mills backed into his first NFL score. In fact, Mills, who would go on to catch 196 total passes during his long NFL career, hadn’t even registered his first NFL catch three games into his rookie season.

“I forgot it was a touchdown,” said Mills after that game, according to The Pittsburgh Press. “I thought it was a safety, then I thought, ‘No, it’s a touchdown.'”

How was that play scored? The official NFL gamebook has it as a 0-yard punt return for a touchdown.

What did Wagner have to say about the bum play after the game?

“He’s blocking in an area and trying to do his job,” Wagner said of Lockhart, according to The Boston Globe. “I really didn’t see what happened. I was kind of shocked. I didn’t feel anyone close to me, but I try to block all that out. It was just me and the ball.”

“We’re in a tight punt situation and he [Lockhart] backed up and can’t [in that situation],” said MacPherson. “He got a Wilson in the rear end with gold lettering.”

That score by Mills put the Steelers ahead 20-6, and that’s the way the game would end. Not exactly a heinie-kicking by the Steelers, but they were never behind in that game, which according to the gamebook included 53,703 fannies in seats to watch it.

Lockhart, by the way, was the Patriots’ starting linebacker in that game, and he finished the contest with just one assisted tackle. At the risk of being labeled an ass for this, it is my duty to let you know that Lockhart had one fewer tackle in that game than starting Patriots safety Harry Colon did.