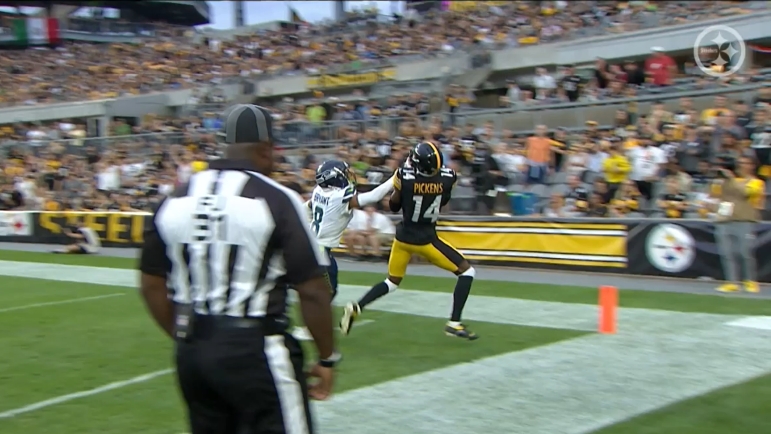 Zac Taylor is entering his fourth season as head coach of the Cincinnati Bengals. The first two didn’t go so well, but he really started putting together the building blocks of the team, particularly the offense, that was able to make a nearly successful Super Bowl run in 2021, starting with quarterback Joe Burrow in the first round and then wide receiver Tee Higgins in the second.

He followed his second draft class by kicking off his third with another bang at the receiver position in Ja’Marr Chase. With those two, he knows first-hand very well that it doesn’t have to take rookie wide receivers long to come out of the blocks like gangbusters. And he’s using that wisdom to prepare accordingly for the Pittsburgh Steelers’ George Pickens on Sunday.

Asked what he learned from watching Higgins and Chase mature so quickly on his own roster with respect to preparing to face Pickens on Sunday, Taylor told reporters of the challenges of facing potential start rookie receivers, “That they can be bigtime playmakers Week 1”, via the team’s website.

A second-round draft pick out of Georgia, Pickens gained a tremendous amount of buzz for putting on daily displays of his receiving prowess at Latrobe during the Steelers’ training camp. Although he didn’t sparkle as much later on, he also made some very fine plays in the preseason opener, including a deep-pass touchdown.

He is, especially in hindsight, widely regarded as possessing first-round talent—he certainly has the physical traits that are typically associated with receivers drafted that high—and if not for a knee injury that limited him his final season, and supposedly some concerns about his maturity level, he undoubtedly would not have been available for the Steelers to pair with their first-round quarterback, Kenny Pickett.

As for Chase, you know the rookie season he had, but the point is, he kicked it off with a bang. Against the Minnesota Vikings in the 2021 season opener, he caught five passes for 101 yards and a touchdown. He had four scores by the end of his third game, including two against Pittsburgh.

Higgins did not get off to nearly as fast a start in 2020, and indeed did not play in the opener. He caught three passes for 35 yards in his first game a week later, but he did have two touchdowns in his second NFL game, on five catches for 40 yards.

It’s been proven for many years now that wide receivers can make an impact early on—very early indeed. And the Steelers do have a history of just that. Chase Claypool in 2020, for example, authored the latest ‘splashy’ debut with an impressive deep sideline catch and a game-winning fourth-down conversion. He scored on an 84-yard touchdown a week later and then scored four times in his fourth game. So both of these teams are very aware of the kind of impact a rookie wideout can have from the word go.