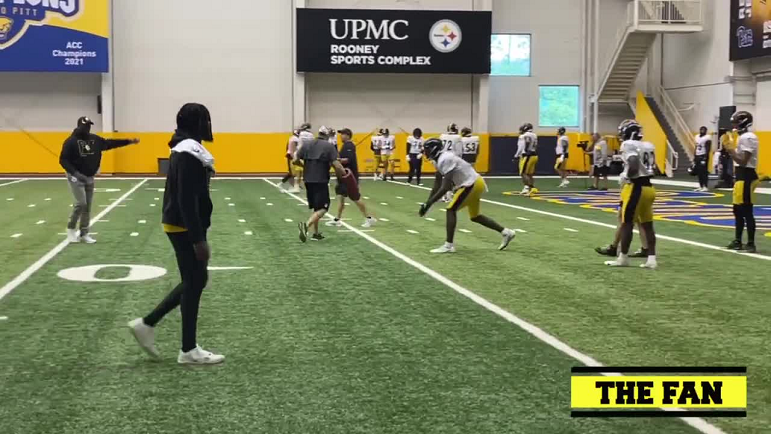 Based on footage from practice Monday for the Pittsburgh Steelers at the UPMC Rooney Sports Complex on the South Side, the shoulder injury wide receiver Diontae Johnson suffered in the preseason finale against the Detroit Lions at Acrisure Stadium is lingering.

According to a tweet from practice with footage of Steelers wide receivers going through drills from 93.7 The Fan’s Josh Rowntree, Johnson was seen sitting out, wearing sweatpants and his practice jersey with no pads on. Though it’s unknown why Johnson is sitting out of practice Monday on the South Side, it could be due to the shoulder injury he suffered in the first quarter August 28.

#Steelers wide receivers (well, most of them) going through drills at practice this morning. 👀 @937theFan pic.twitter.com/UIlFat0L4u

The official injury report for the Week 1 opener against the Cincinnati Bengals is expected to come out later today, but it’s worth noting that Johnson, according to the video from 93.7 The Fan’s Josh Rowntree, isn’t practicing at the moment.

Johnson suffered the shoulder injury in the first quarter against the Lions in the preseason finale, presumably on the diving 38-yard catch he made down the left sideline from quarterback Mitch Trubisky.

A short time later, Johnson left the game and was questionable to return with the shoulder injury, though head coach Mike Tomlin downplayed the severity of the injury, along with T.J. Watt’s knee injury, stating both would have likely gone back into the game if it were a regular season game.

We’ll see what Tomlin has to say regarding the injury report later today.